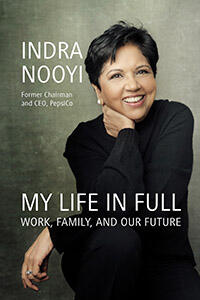 When Indra Nooyi ’80 first introduced the notion of making PepsiCo’s food and beverage products healthier back in the 1990s, when she was the company’s president and CFO, her colleagues were skeptical.

“They said, ‘We’re a soda-and-chips company,’” Nooyi told a Yale School of Management student audience on November 2. Nooyi set the idea aside, but she returned to it when she became CEO in 2006.

“I never gave up,” she said. “If a trend is staring at you, it doesn’t matter if you’re CEO, number two, or number three [in the company hierarchy]—you’ve got to keep talking about it.”

Nooyi spoke during a discussion of her new book, My Life in Full: Work, Family, and Our Future. The event was sponsored by the Yale SOM Alumni Association and moderated by Dean Kerwin K. Charles.

Nooyi credited Yale SOM with instilling in her the persistence required to pursue not just a good business trend, but a trend that’s good for society as a whole.

“Fortunately, thanks to my Yale SOM education, I didn’t know any other way to run a company except responsibly,” she said. She went on to launch PepsiCo’s landmark Health and Wellness initiative, which made the company’s products healthier, in both U.S. and global markets. She also pioneered a move to better match products with their overseas markets, both in terms of environmental sustainability and nutrition. “I knew I couldn’t export the U.S. model,” she said. “You had to rethink the company for the environment in which we had to operate.”

The first woman of color and immigrant to run a Fortune 50 company, Nooyi is among the world’s most admired business leaders. Charles called her “one of our most distinguished alums and one of our most connected alums,” thanking her for her continued presence at Yale SOM and her support of multiple Yale initiatives, including the endowment of the school’s deanship.

“I am who I am because of Yale SOM,” Nooyi said.

Nooyi was a member of Yale SOM’s third class, which had just 110 students. “It was a fascinating blend of the public, the private, and the nonprofit sectors,” she said of her classmates’ backgrounds and career aspirations. “The integration of business and society is what SOM was all about.” Nooyi attended Yale on a partial scholarship: “It was a gift to me, and the fact that Yale gave me a scholarship made me want to give back,” she said.

In addition to her support of Yale, Nooyi has funded educational initiatives in India and elsewhere, and served in numerous advisory roles.

Today, she stands strongly behind efforts to initiate policy to establish a trifecta of family-friendly workplace initiatives: mandatory paid leave, flexible workplace arrangements, and a “care infrastructure” to address the needs of essential workers for whom it is not possible to work from home.

During the November 2 event, Nooyi and Charles also discussed Nooyi’s immigrant experience and the challenge of being the only woman, as well as a person of color and an immigrant, in the C-suite for a good part of her career. “I focused on the work,” she said. “I decided I was going to be heard for what I contributed to the discussion. It was brutal hard work that got me, not just a seat at the table, but allowed me to stay at the table.”

Along the way, Nooyi had to juggle parenting duties and family obligations, a dance that she said technology has made easier today but is still, by no means, easy. “There is no balance,” she said. “It’s a big juggling act...and you just hope you don’t drop the balls that day.”

Nooyi encouraged Yale SOM students to see their education as a gift and a responsibility, and to stay connected to the Yale community.

“Consider yourselves very fortunate to be at Yale SOM,” she said. “This is one of the most amazing business schools in the world. Every time I walk into the school, [even now,] my heart starts beating faster.”