Yale School of Management today announced that Indra K. Nooyi ’80, chairman and chief executive officer of PepsiCo, Inc., has made a landmark gift to endow the deanship of the school and inaugurate the Fifth Decade Innovation Fund. With this gift, Nooyi becomes the most generous graduate of Yale School of Management in terms of lifetime giving to the school. She is the first woman to endow the deanship at a top business school.

“My experience at the Yale School of Management forever altered the course of my life,” said Nooyi. “My gift to this wonderful institution pales in comparison with the gift that Yale gave me—the fundamental understanding that leadership requires an expansive worldview and a deep appreciation of the many points of intersection between business and society. Business issues are never just business issues, and my most ardent hope is that this endowment will teach future generations of leaders that the most successful companies of tomorrow will do more than make money. They will make a difference and create shareholder value by improving the quality of life in every market in which they operate.” 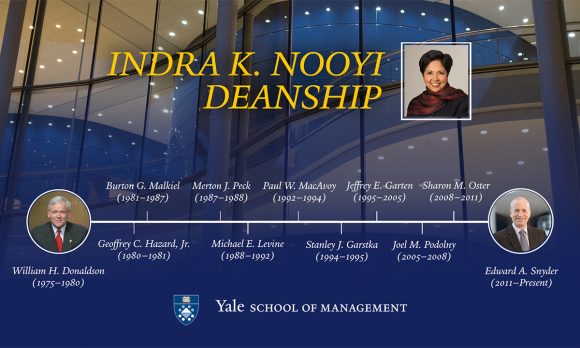 Nooyi has served as chief executive officer of PepsiCo since 2006, and chairman since 2007. She is the chief architect of Performance with Purpose, the company’s promise to deliver top-tier financial performance over the long term by integrating sustainability into its business strategy and leaving a positive imprint on society. This vision has led PepsiCo to diversify its product portfolio to meet changing consumer needs. Today, less than 25 percent of PepsiCo’s global revenue is derived from carbonated soft drinks and approximately 20 percent comes from the company’s nutrition businesses. Under her leadership, PepsiCo has also been an industry leader in promoting environmental sustainability. For example, since 2006, the company has reduced its operational water use by 23 percent and improved the energy efficiency of its operations by 16 percent.

My gift to this wonderful institution pales in comparison with the gift that Yale gave me—the fundamental understanding that leadership requires an expansive worldview and a deep appreciation of the many points of intersection between business and society.

Before joining PepsiCo in 1994, Nooyi worked in senior roles at Asea Brown Boveri, Motorola, and the Boston Consulting Group. Nooyi serves as a member of the boards of U.S.-China Business Council, U.S.-India Business Council, the Consumer Goods Forum, Catalyst, Lincoln Center for the Performing Arts, and Tsinghua University. She is a past member of the Yale Corporation, the top governing board and policy-making body for the university. She is also a member of the Foundation Board of the World Economic Forum and the American Academy of Arts & Sciences, and was appointed to the U.S.-India CEO Forum by President Obama.

Peter Salovey, Yale University president and the Chris Argyris Professor of Psychology, said, “Indra Nooyi’s sense of purpose, deep engagement with civic life, and pursuit of excellence exemplify the kind of leadership in service to society that we hope all Yale graduates will achieve. The world needs skillful, purposeful, and dedicated leaders in every field and every sector, and Indra’s name is synonymous with those core values of the university.”

As part of a long record of support for the Yale School of Management, Nooyi has previously made substantial contributions to the construction of Edward P. Evans Hall, including gifts to name the Nooyi Classroom and the Isaacson Classroom in memory of Professor Larry Isaacson.

Edward A. Snyder is the inaugural Indra K. Nooyi Dean. He has led the Yale School of Management since 2011 and was recently appointed to a second five-year term as dean. Snyder said, “Indra Nooyi has become a leading voice among Fortune 500 CEOs in no small part because of her willingness to take a stand on the broader purpose of the corporation, while delivering top-echelon performance. The Yale School of Management community has long been proud of Indra Nooyi’s accomplishments and tremendously grateful for her ongoing support for the school. Her generous support will enable us to pursue new opportunities and initiatives, in keeping with the spirit of innovation that has always been a hallmark of Yale SOM. Having the deanship named in her honor communicates to the world the school’s model of purposeful and broadminded leadership.”

The school’s founding dean, William H. Donaldson YC ’53, HON ’73, said, “Our original vision for the school was to educate leaders who could apply entrepreneurial effort to their work in any of three sectors—corporate, nonprofit, or government—while understanding the similarities, differences, and interconnections among these sectors. Indra Nooyi is an exemplar of this approach to leadership, and her career proves the enduring strength of that vision. It is more than fitting that her name be associated with the top leadership position at the school.”

The Yale School of Management community has long been proud of Indra Nooyi’s accomplishments and tremendously grateful for her ongoing support for the school.

The Fifth Decade Innovation Fund is named in recognition of the fact that the school is entering its fifth decade; the first class entered the Yale School of Management in 1976. The fund is an ambitious initiative designed to advance the school’s aim of developing leaders with the broad global mindset and multi-disciplinary approach to business that is needed to succeed in 21st-century capitalism. The school has been innovative from the start, with its focus on the connections between the private and public sectors. In more recent years, the school revamped the core business curriculum to create the integrated curriculum, which teaches critical skills in a broader organizational context. Just since 2012, the school has played an essential role in the creation of the Global Network for Advanced Management, which now includes 28 top business schools around the world and enables a slate of enriching student programs; launched a new, one-year post-MBA degree, the Master of Advanced Management; and greatly increased support for entrepreneurship through the Program on Entrepreneurship. The Fifth Decade Innovation Fund will be open to additional substantial contributions that can help the school develop the technology and other infrastructure to support these and future initiatives.