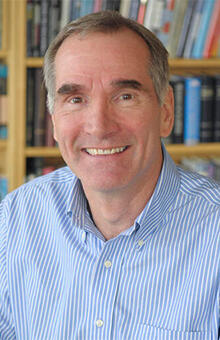 David Swensen, who served as Yale’s chief investment officer for more than 35 years, died on May 5. Swensen introduced a diversified approach to endowment management, now known as the Yale model, that brought the university industry-leading returns and reshaped the world of institutional investing. A beloved teacher, he lectured for many years at Yale SOM and served as a mentor to the many SOM graduates who worked at the Yale Investments Office and went on to lead other major endowments.

We asked some of the many alumni and faculty who worked with and learned from Swensen for their thoughts.

Yes, Dave was a legendary pioneering investor and built incredible value for Yale and many other endowments and charities, but to me what was extraordinary and special was how much he loved and cared for his wife Meghan, family, friends, and Yale, and how he was able to lead and inspire all those around him. I was so incredibly lucky to have him as my Berkeley College freshman counselor in Wright Hall 45 years ago. Since then, he has been my mentor, boss, teammate, co-coach, co-teacher, colleague, partner, supporter, best man for my wife Wendy and me, and best friend.

An amazing aspect of David’s leadership is his ability to inspire all those around him to do their best and to commit to the mission of higher education and charitable work. Yale’s investment partners embraced principles of integrity and serving the public good. Dave led the endowment and institutional investment world, not only in pioneering the Yale model of asset allocation, but also in ethical investment practices and promoting diversity and combating climate change. He was particularly proud that he helped mentor and develop Investment Office staff members to continue their careers with a mission focus. Fifteen former members of the office have gone on to run leading endowments or foundations and two-thirds of them are women. Astonishingly, of the 15 top ranked endowment based on performance over the past 10 years, 6 are managed by Yale Investments Office alumni. Dave’s training and mentoring have benefited many of the nation’s leading colleges and universities. Although we will sorely miss his amazing spirit and caring friendship, his pioneering legacy will live on.

David and I worked jointly on the curriculum for a new Master’s Program in Asset Management. I had the pleasure and privilege of working side-by-side with him on the curriculum, design, and operations of the program. His enthusiasm was contagious and his passion for investment and academia made him the ideal partner. David was incredibly generous with his time, even when that time was limited, and despite all that he was going through, I never saw even a glimpse of negativity or frustration (other than some officiating in the Packers-Buccaneers playoff game, but that’s it!). He was always positive, always helpful, and showed me what it meant to approach investments the right way and to live the right way. I will miss him greatly.

Dave’s direct accomplishment set is broad, deep, uniquely impactful, and while well-known and widely praised, is still, somehow, underappreciated. For so many, he inspired our career choices and our drive to excel; he was a most worthy and generous competitor. No teacher, no mentor, no leader ever communicated more clearly through his actions as well as his words. He taught me much. The most significant lesson was the importance of partnership and of being a good partner.

Much has been said and will be said about David Swensen’s outsized impact on the world of investments and endowment management. From my personal perspective, David was instrumental in my career, as he was for so many others in the field of endowment management. His passion for investments and dedication to Yale, and to higher education broadly, were profoundly inspirational. David’s passing is a big loss for Yale and a sad moment for all of us who were mentored, befriended and taught by him over the years.

David was larger than life in many ways, but for those of us who worked closely with him, he was a human, a friend, and a teacher.  He loved talking shop with the world’s greatest investors, but had the same level of enthusiasm for sitting down with an intern to provide career advice.  David was so generous in sharing his time and knowledge with everyone.  I’m grateful for the time I had with David, and for everything he taught me about investing and life.

David Swensen was one of the most influential investors of his generation. His pioneering endowment model changed the way institutions invest, moving them from a narrow focus on marketable securities to an extended diversification across a variety of unusual assets including natural resource funds, private equity, venture capital and absolute return strategies. He showed that these less-than-efficient markets offered opportunities for astute investors. As a result, David’s approach was fundamentally humanistic; it centered on identifying, assessing, hiring and developing talented individuals. The insight that investment management is as much about people as it is about numbers is an important lesson I learned from David Swensen.

I had the honor of co-teaching with him on one occasion and working with him on Yale’s policies on socially responsible investing. He was deeply committed to the mission of Yale and to the idea of investment with a purpose. I deeply admired his perseverance and courage through his personal health struggles, and appreciate how much of himself he gave to Yale. He left an extraordinary legacy.

David was my first teacher in the discipline of investing; he taught me what it meant to be a fiduciary, to be truly long term, and to build an organization with a soul.

I was a student when I first met David. I didn’t have the money to pay for my second year of tuition at Yale, and I was desperately looking for a job. David gave me a chance with an internship at the Investments Office.

David had confidence in me when few people did. When he made the decision to seed Hillhouse, I was 32 and I had never managed a portfolio. My partners at the time (who are still my partners now), did not come from the investment world. The only thing we had in common was that none of us had managed investments before, and that we all had an unbounded eagerness to learn.

I’ve asked David before why it was that he invested in Hillhouse, at the time when surely no other institutional investor would have taken the chance. He said, when you work with the right people, something good is bound to happen. This has become a mantra now at Hillhouse, “Spend quality time with quality people.” I think this is perhaps the most important lesson there is about investing, and David knew it by heart.

David Swensen’s passing last week came as a shock to many of us who knew him. Despite his long battle with cancer, David never slowed down, cheerfully continuing to produce top-tier returns for Yale’s endowment, teaching and mentoring, and as always, being an enthusiastic cheerleader for Yale. His long and ongoing collaboration with the School of Management in teaching, growing the school’s endowment, mentoring, and creating internships and professional opportunities for SOM students fundamentally impacted the school.

David’s passion and love for investing changed the asset management industry, laying the groundwork for increased support from endowments and foundations for important institutional missions. His investment philosophy and pioneering approach to uncover investment opportunities in global markets has become the touchstone for excellence in investment management, a legacy that will live on in the teachings at SOM. David touched so many lives through his work and friendship and he will be greatly missed.

David’s legacy will live on for many more decades, as mentoring and developing talent is the gift that keeps on giving to endowed institutions and this was his consummate focus. The intricate web of chief investment officers trained by David has established a perpetual ripple effect of creative investing by people who have a profound understanding of David’s first principles: patience, alignment of interest, and exploiting market anomalies. He knew that investing is mostly about partnering with passionate, high-integrity people, whether they are on your investment team or the GPs of your managers. SOM should be incredibly proud that a disproportionate share of this CIO talent is from its alumni!

I met Dave Swensen at the copy machine of 451 College Street in 1986, when I was doing copying for another office and he let me come work at the Investment Office, where I worked full-time summers and part-time during the term for my whole undergrad career. He was extraordinarily generous with his time, even then. As an intern in the office, he would let us sit in on important meetings. He would sometimes take the students for lunch at Mory’s—and the 1987 Dave Swensen Mory’s lunch had some common features with the 2007 Dave Swensen lunch or the 2017 one: a fascinating conversation at lunch, no hurry, and on the walk back, he always had something he had discovered about Yale that he wanted to show you—a gargoyle, a plaque in the corporation room, some detail on a facade. Over those years, there was always something new, some way in which Yale had revealed its secrets to him, and he wanted to share them with whomever he was with.

We were organizing an event at SOM when the pandemic hit last year. The event we had scheduled showcased women endowment managers who were his mentees. There are so many—like Lisa Howie ’08, who has just been selected to run the Smith College endowment. They were going to talk about their work and careers. We asked him how he might like to be celebrated at the event and he said “Oh, I want to sit in the audience and learn!”