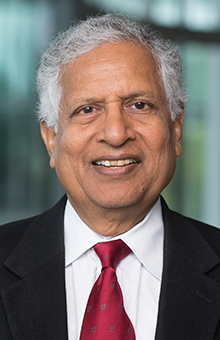 Shyam Sunder, the James L. Frank Professor of Accounting, Economics, and Finance, will be inducted into the Accounting Hall of Fame at the annual American Accounting Association (AAA) meeting later this year, the association announced on February 14.

Sunder is a renowned accounting scholar and experimental economist. His research contributions to accounting include financial reporting, information in security markets, statistical theory of valuation, social norms and regulation. He is a pioneer in the fields of experimental finance and experimental macroeconomics. A thinker with wide-ranging interests, he created the long-running course Management Leadership and the Humanities, as well as the Convening Yale series, which brings scholars from across Yale University to present their research to Yale SOM students.

The Accounting Hall of Fame “honor[s] and recognize distinguished service and contributions to the progress of accounting in any of its various fields,” according to the AAA. “Evidence of such service includes contributions to accounting research and literature, significant service to professional accounting organizations, wide recognition as an authority in some field of accounting, advancement of accounting education, and public service.”

Reflecting on the academics and practitioners who have preceded him in the Hall of Fame, Sunder said, “It’s nice to be in this distinguished company.” He added that it is particularly gratifying to join in the Hall of Fame three of his mentors from Carnegie Mellon University, where he received his doctorate and taught early in his career: William W. Cooper, Yuji Ijiri, and Robert S. Kaplan—as well as Joel Demski, a former member of the Yale SOM faculty.

Sunder has taught at Yale SOM since 1999. He is a past president of the AAA, and the recipient of many awards, including the AAA’s Accounting Horizons Best Paper Award, Outstanding Accounting Educator Award, and Notable Contributions to Accounting Literature Award.

Sunder plans to attend the annual meeting of the AAA in August, where he will be inducted alongside four other practitioners and scholars. “I get a chance to meet so many people, listen to their ideas, see what they’re thinking,” he said. “It’s a great opportunity.”