Without ongoing development even the most resilient system can be threatened by rising entropy - changes imposed by both external and internal factors. In this light, a rather interesting situation has arisen on the market: companies that have turned essentially no profit are worth tens of billions (examples include Uber and Netflix), and have multiples that are several times higher than those of companies in the “old” economy. Landmark changes are already happening in financial industry: algorithmic programs are replacing people in asset management business, companies such as PayPal and Alipay are taking business not only from banks but also from companies that have traditionally been considered leaders in innovation – those such as MasterCard and Visa. 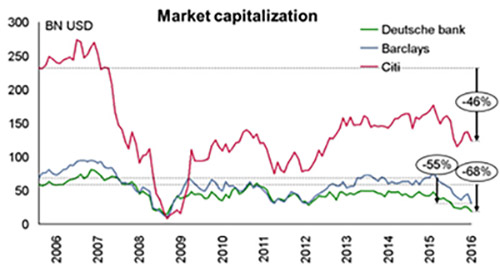 Meanwhile, share prices of leading European and less so American banks continue dropping, and they are doing so for completely understandable reasons: regulators are fighting for the deleveraging of banks across the globe in order to avoid another crisis similar to the one that felled Lehman Brothers and Bear Sterns. New rules are being introduced and OTC trades are migrating toward a central counter party, given that it is easier for regulators to oversee one hub rather than delve into the operations of an array of banks.

In the currency wars, negative interest rates are becoming the norm, which means that it’s becoming cheaper to hold cash than to keep money in an account. Naturally, negative rates are leading to the death of the centuries’ old business model of banks, namely receiving money from depositors and lending it out to others. Also, if previously a commercial banker dreamed of becoming an investment banker, now an investment banker dreams of joining the likes of Google or Apple. And any bank shareholder definitely dreams of the kinds of multiples that fintechs now enjoy.   Is this the end of the road for the banks?

Notwithstanding their unwieldiness, banks still possess a number of advantages: experience managing client risk, their balance sheets, and the fact that they are known entities to the regulator. Nevertheless, it’s clear that there’s no stopping the march of technology.

But this raises a question: are banks dinosaurs in today’s world or are they capable of evolving? That I guess is not an easy question to answer. What the fintechs have figured out is how to take inefficient services from the financial behemoths and repackage them as attractive and convenient products that clients are very satisfied to use. Moreover, they have learned to sell the future to investors. But have they learned how to make money?  The answer is unclear.

So what lies ahead?

This is the most interesting question but also the most difficult one. It’s clear that speed of change is critical for banks. Most fintechs are created to be bought by the unwieldy banks, but when they actually are bought, alas, they begin to be valued in line with the multiples of banks, rather than in line with their own worth.   I expect that we will probably end up seeing a symbiosis of the banks, fintechs and regulators – the latter’s role in this trio is of fundamental importance. The regulator must learn to work with crypto-currencies, block chains and other innovations, insofar as these novelties will all require new approaches to regulation. If all countries used a single crypto-currency, for example, then such things as currency wars would simply disappear. Are the regulators ready for such changes? Not in the near future!

I am not going to hazard a guess on the future of fintechs, but I do think that many of them will be wiped out, although a few will certainly manage to hit the jackpot. Among banks, the winners in the coming years will be those that can cut down on the time to market.