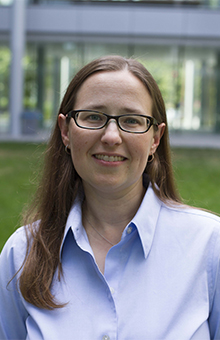 Bridget Gillich ’08 stepped into a new role at the Yale School of Management just as the school was pivoting to address the unprecedented challenges of the COVID-19 pandemic.

“I knew I’d have to shift gears,” said Gillich, who was appointed chief administrative officer in late March and began her new job on April 6. Gillich had already outlined some new initiatives around the time of her appointment, but the pandemic upended her plans.

“Some new priorities have certainly popped up,” she said. “But I see my role—now and going forward—as a facilitator, collecting all the bits and pieces, connecting the parts, and making sure that communication and directives are getting where they need to go within SOM and within Yale.”

Gillich is well prepared to take on the challenge. She’s a veteran staff member and a 2008 graduate of the school’s MBA program. She began working at Yale in 1998 and joined the SOM staff in 2000, at first supporting faculty recruitment. “Then I moved into the business side of the house, and a few years later, I layered in some H.R. responsibilities,” she said.

The school’s integrated core curriculum had just launched when Gillich matriculated as a full-time MBA student in 2006. She had been working in the dean’s office, and the introduction of the new curriculum was one of the things that convinced her to apply to the program.

“I had started to see the impact you could have with an MBA,” she said. “It was a really interesting time to be a student. The Case Studies team had just started writing new interdisciplinary cases, and they were handed out in our classes.”

Most recently, Gillich served as senior director of Business Operations and Human Resources. In her new role, she will oversee Facilities, Hospitality, Human Resources, and IT.

“I am thrilled to be able to draw upon Bridget’s institutional knowledge and her competencies in talent development, financial management, and creating operational efficiencies, among many others,” Kerwin Charles, Indra K. Nooyi Dean and Frederic Wolfe Professor of Economics, Policy, and Management, wrote when announcing the appointment.

Gillich has been part of the Yale SOM community through five successive deans. “This organization has evolved and grown so much,” she said. “And it’s had great leadership every step of the way, bringing it to where it needed to be.”