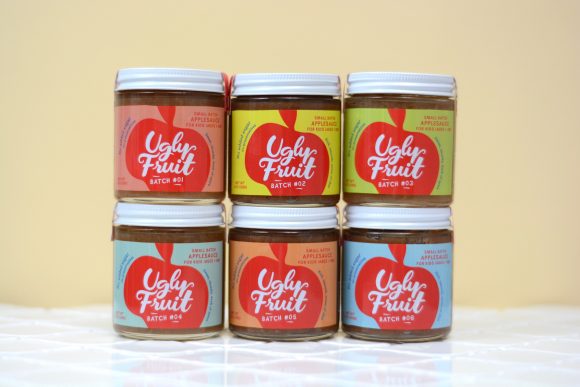 “I’ve always loved food,” says Cat Wu ’17, adding that a recent vacation in Japan included waking up at 5 a.m. for the freshest fish selection from the world-famous Tsukiji Market and lining up for tickets to the first Michelin-starred ramen restaurant. Now Wu has launched her own food startup—a social enterprise called Re-Harvest Foods that turns unused produce into tasty, healthy snack foods. The first product is Ugly Fruit, a specialty applesauce in flavors like apple spice (which has a chunky apple pie-filling texture) and apple chai (which is smoother and thicker like a cross between compote and apple butter). Both products are now for sale in shops across New Haven, including Good Nature Market, Caseus, Koffee, Café Romeo, The Juice Box, and Happiness Lab. The applesauce can also be found at Madman Espresso on University Avenue in Manhattan or ordered online.

Ugly Fruit got its name from the fruit that is left to rot at farms because it is considered too “ugly” to sell. A report from the Food and Agriculture Organization of the United Nations indicated that each year approximately one-third of all food produced for human consumption is lost or wasted—that includes 20 to 40% of all produce not considered pretty enough for purchase. “It’s all cosmetic imperfections,” Wu says. “Grocery stores need apples to be spherical, to have certain shadings. That’s not how fruit looks in the wild. Sometimes it has a dimple or a brown spot.”

Wu reached out to fruit farmers across Connecticut and New York—she now works with a half dozen—and made arrangements to pay them to store their less-than-perfect-looking apples over the winter. She connected with a caterer to create the proof of concept, testing out flavors on small focus groups and doing blind taste tests to compare her sauce with other brands. She also interviewed hundreds of people on their applesauce-eating behaviors, including a lot of millennials at a Trader Joe’s in New York City’s Union Square. When it came time to test out her hypothesis—would adults buy a premium, small-serve applesauce?—she sold it through a few stores in New Haven with almost no promotion. All the product sold out in two weeks.

Now Wu is excited to bring her small-batch applesauce to a broader audience looking to expand its applesauce palette. Ugly Fruit is being marketed as more than just a sugar- and preservative-free snack, but also as a condiment on toast, waffles, yogurt, meats, and other foods. Future flavors will incorporate peaches and blueberries—the fruit waste of summer. Meanwhile, Wu is spending her summer perfecting her business as part of the Yale Entrepreneurial Institute’s YEI Fellowship, connecting with mentors in the industry and learning about everything from production to sales and distribution. She’ll pitch Re-Harvest Foods along with the other 10 fellowship teams on July 21 during YEI Demo Day. “A founder has to know every aspect of the business,” Wu says.

This story originally appeared on the Yale Entrepreneurial Institute website and is reproduced with permission.