Yale School of Management has received generous gifts to endow a new professorship named for Dean Takahashi, a member of the Yale SOM Class of 1983 who serves as senior director of the Yale University Investments Office. 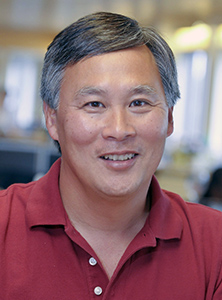 The funds for the gifts were raised through a special initiative to honor Takahashi’s 30 years of service to Yale, led by David Swensen PhD ’80, Yale’s chief investment officer, and two other Yale graduates with deep finance experience: Charles “Chip” Goodyear YC ’80 and Josh Bekenstein YC ’80. The new Dean Takahashi ’80 BA, ’83 MPPM Professorship will help Yale SOM build on its strength in the area of finance and asset management.

Takahashi was one of the first people hired by Swensen in 1986. At the time, the endowment was worth about $1.5 billion; as of June 30, 2015, it stood at $25.6 billion. With a 30-year return of 13.9%, the Yale endowment has consistently outperformed market benchmarks, such as the S&P 500, as well as the universe of other large university endowments. The “Yale Model,” which emphasizes diversification and increased the endowment’s commitments to venture capital, foreign equity, private equity, real estate, and natural resources, has been widely emulated by other institutions.

In a 2015 Convening Yale talk at Yale SOM, Takahashi spoke about the great team in the Investments Office, which has included a number of Yale College and SOM graduates over the years. “When we recruit, we look for people who care about Yale and who care about investing, who care about more than just making money,” he said. Takahashi teaches the course Endowment Management at Yale SOM and an economics seminar in Yale College.

Numerous friends, classmates, and colleagues participated in the effort to raise funds in honor of Takahashi and his wife, Wendy Sharp YC ’82, a member of the faculty of the Yale School of Music. In addition to the SOM professorship, endowed funds were also established at the School of Music and Yale College. The effort also allowed for the naming of a Berkeley College Common Room. Takahashi notes, “My family and I are immensely grateful and overwhelmed by the amazing generosity and support. Furthermore, I am incredibly fortunate to have come to Yale and to have teamed up with David Swensen and the other superb colleagues in the Investment Office, partnering with extraordinarily talented and dedicated investment managers working on behalf of the university.”

At a celebration held on February 23, 2016, Edward A. Snyder, the Indra K. Nooyi Dean and William S. Beinecke Professor of Economics and Management, commented on the importance of what the Yale Investments Office does for all Yale deans, calling the David Swensen-Dean Takahashi partnership “the essential complement” to his work as dean of Yale SOM.