For years, Yale School of Management students have competed against each other in a fictional stock market game that transformed the New Haven Lawn Club ballroom into a raucous, faux trading pit.

Yale SOM's Investor Trading Game is one of the highlights of the fall semester for first-year MBA students, a fun, challenging event that builds on the lessons of the Investor course. Created by Roger Ibbotson, professor in the practice of finance, the game—played with a deck of cards, mock paper money, and shares of color-coded companies—has become a staple of the integrated MBA curriculum.

"Now the game reflects the way stocks are traded today—electronically," Ibbotson says. "Everything happens much faster. There are more variables that can be adjusted and the computer keeps a score on everyone playing. It's what's happened to the real markets."

The new version isn't quite as atmospheric as the original. At the online game's debut, Ibbotson walked through the Hall of Mirrors and into adjacent classrooms where more than 200 MBA students sat riveted to their laptops. No one shouted "buy" or "sell," and mock money never changed hands. "In the live game, you had a more rowdy, relaxed atmosphere," Ibbotson says. "This was much more intense and focused."

But the main point of the game has not been lost, Ibbotson says. In fact, it's been enhanced. "The real benefit is that students learn how to collaborate and share information to benefit all of them," Ibbotson says. "Collaboration is the key to the game and the key to success." 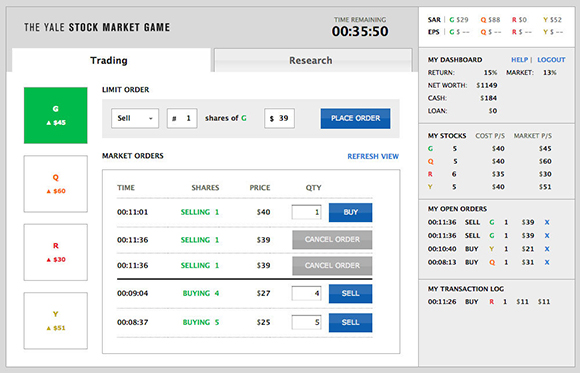 The online version permits a greater array of changeable factors, such as the accessibility of information that may influence stock prices, and allows market conditions to fluctuate more rapidly. The game also compresses time more efficiently, allowing a year's worth of market activity to be depicted in one hour of playing and giving students a better view of the long-term repercussions of their trading.

For Shreya Agrawal '14, the game was a realistic introduction to trading.

"Having never actually traded stocks, the online simulation was a great way for me to learn about the fast-paced changes that occur in the real market," Agrawal says. "We bought and shared information in a way that let us try to predict the actual value of the stocks. It was a game of high energy, stress, and fun, and at the end, most of us came out on top."

Ibbotson created the Investor Trading Game while he was teaching at the University of Chicago Booth School of Business. He brought it to Yale SOM in 1984. Students in his classes played it for years, and in 2006 the entire first-year MBA class began playing the game at the Lawn Club as part of the Investor course.

Four years ago, Ibbotson enlisted the help of the Yale Center for Media and Instructional Innovation (CMI2) to bring the game online. Gabriel Rossi, now director of faculty affairs at Yale SOM, was on staff at the CMI2 at the time.

It took programmers and academic advisors a year to design the game and another two years to build and test the website. "It was on the cutting edge of what we were doing in terms of instructional technology," Rossi says. "The electronic version has much more flexibility. It's scalable and easy to set up. You can play it anywhere."

The game is now being made available to the entire Yale community, Ibbotson says. It will be used in undergraduate economics classes this year, as well as at SOM. Plans are also underway to offer the game to schools outside Yale, once online and video prep materials have been developed. "A lot of people learn by doing," Ibbotson says. "Here, you're actually doing the trading."