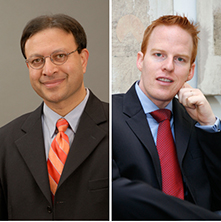 Yale School of Management Dean Edward A. Snyder announced two leadership appointments: Anjani Jain will join Yale SOM as senior associate dean for the full-time MBA program on July 1, 2012; David Bach will join the school as senior associate dean for executive MBA and global programs on September 1, 2012. Jain has served in multiple leadership roles at the Wharton School of the University of Pennsylvania, including 10 years as vice dean of its full-time MBA program. Bach is currently dean of programs at IE Business School in Madrid, Spain.

These appointments come at a time of important expansion and opportunity for Yale SOM. The school recently introduced a Master of Advanced Management program and participated in the launch of the Global Network for Advanced Management, a collective effort by 21 international business schools to understand the challenges posed by complex global markets. Furthermore, with the move to Edward P. Evans Hall, which is slated for late 2013, the school intends to significantly increase the number of students in it master's degree programs.

Dean Edward A. Snyder said: "Both Anjani and David are highly motivated by Yale SOM's mission to educate leaders for business and society, and I am confident they will make important contributions as the school continues to grow in scope and influence. We have an extraordinary opportunity to achieve greater integration with Yale, strengthen relationships with enterprises in all sectors, and solidify an innovative and distinctive role globally. In other words, Yale SOM has the potential to become a truly global business school, resulting in more academic and professional opportunities for students and alumni. Having Anjani and David join Yale SOM at this promising juncture is an exciting development."

As senior associate dean for the full-time MBA program, Anjani Jain will focus on Yale's flagship full-time MBA program, assuming lead responsibility for admissions, career development, and student and academic services. Jain has had a distinguished and impactful career at Wharton over the last 26 years. For the past two years, he has been the vice dean of the MBA program for executives, and before that, he spent ten years as vice dean of the MBA program. Jain has taught a range of courses and conducted important research in production and operations management, and he will contribute to the Yale SOM curriculum as a senior lecturer. Among the many teaching and education awards he has received, Jain was recognized for his contributions to African-American students with the Howard E. Mitchell Award.

Bach is currently dean of programs and professor of strategy and economic environment at IE Business School. As dean of programs, Bach has driven innovation and ensured the academic rigor and operational excellence of IE's numerous master's programs. In this capacity, he also served as academic director of the IE Brown Executive MBA, a program that fuses Brown University's strength in liberal arts with IE's expertise in management education. Among his many awards and honors, Bach twice was named "one to watch" in the Thinkers 50 ranking of leading management thinkers. Bach is a graduate of Yale College, and has an MA and a PhD from the University of California, Berkeley, in Political Science.