A 1994 ballot from South Africa's first democratic elections, with the pivotal IFP sticker in place (bottom). 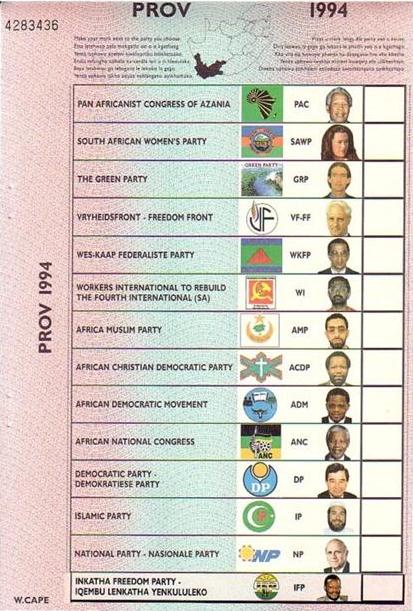 “As successful negotiations led to plans for an April 1994 election, Buthelezi and the IFP were still not part of the process and had not agreed to be on the ballot. Having a significant party not participate would jeopardize the validity of the election.

While many of the international mediators left quite shortly after their arrival, Professor Washington Okumu from Kenya stayed behind. He played a key role in persuading Buthelezi to participate in the elections. Buthelezi credited two factors in changing his mind - the hand of God in causing engine trouble in his plane and forcing him to return to talks, and input from Okumu, his long-term friend and spiritual advisor. Whatever the motivating factors, on April 19 Buthelezi agreed to participate in the elections, scheduled to begin on April 26.

Once Buthelezi agreed, the logistical challenges had to be addressed. Members of the business community had used the Anglo jets to arrange meetings with the key players in this period. After the agreement, the corporate jets flew in stickers from the printers in England, to add the Inkatha party to the bottom of the list on the already-printed ballots and then to fly the modified ballots to various regional polling places. The elections were held from 26-28 April 1994.”