A quick and simple diagnostic test developed by Wendy Davis ’14 to detect the potentially life-threatening pregnancy condition preeclampsia has been honored for its potential “to address 21st-century humanitarian challenges.” 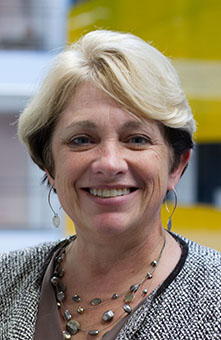 The U.S. Commerce Department’s United States Patent and Trademark Office (USPTO) this month named GestVision and CEO/founder Davis among the latest winners of its Patents for Humanity program, an Obama administration initiative that promotes innovation as a tool to solve longstanding development challenges.

An alumna of the Yale School of Management’s MBA for Executives program, Davis launched GestVision, which is based on research developed at Yale, as an independent study project while she was a student in the program. The GestVision test detects markers for preeclampsia through a simple urine test and holds great promise to improve maternal and fetal health, especially in the developing world.

In its announcement, the USPTO notes that GestVision’s test kits are currently being used in clinical studies around the world, including in Bangladesh, Mexico, and South Africa, under a grant to the Research Institute at Nationwide Children's Hospital from Saving Lives at Birth, which is a collaboration of USAID, the Gates Foundation, and others. GestVision is working on a manufacturing process to produce the kits in large volume.

Award recipients will receive public recognition at a USPTO ceremony. They also receive a certificate that will enable them to get accelerated processing in some USPTO transactions.