Nick Andris and his cofounders launched oVote at SOM in August. Since then, users have shared over 12,000 views on oVote. The app was featured in Thrillist's 21 Essential Apps for Essential Life In DC, and was used to show Hillary Clinton that the Yale community supported her. 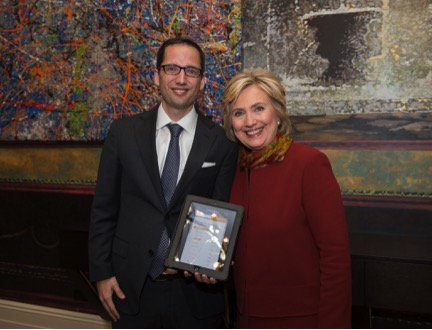 oVote is a suite of apps for asking communities questions that are easy to answer. Leaders make groups their people join. Then questions arrive as push notifications which you can answer by tapping the phone twice: tap open, tap to respond.

One day we hope Oprah pings an oVote question to her fans with a notification, and shows results after the commercial. There’s no way for her to do this today. Harnessing smartphones for mass Q&A could open a lot of new engagement for politics and brands as well.

How did you get this photo?

The iPad shows SOM’s oVote for president, which Hillary won. We got it by creating an SOM Opinions group and asking friends to join and vote. Three months later there was a Greek-American fund raiser for in New York.

Getting clearance to have the iPad in the photo was a challenge because it could have represented a PR problem if the screen showed something controversial. We often hear “it’s better to ask for forgiveness than permission,” but this situation called for permission. I spoke with two of her staff members to clear it. Once I got approval, I met Secretary Clinton and told her Yale picked her, and showed her the iPad. She gave it a careful look and happily agreed.

Nick now that you are getting ready to graduate from the Yale School of Management, what is on the horizon?

We're applying to summer accelerators, which are ten-week programs for startups where you receive funding and mentorship. Afterwards we’ll probably come back to New Haven, CT, since the campus has been warm in accepting us.

What was the inspiration for creating oVote?

I was shy when I was young so I’ve always tried to encourage people to have more of a voice. With smartphone proliferation, there’s a chance for everyone’s opinion to be taken into account in more decisions.

How has your background in finance helped you create a technology based company and without formal technical training, how did you over come the technical aspect of developing the service provided by your company?

Investing humbles you. After seeing the Wall Street heroes invest in the wrong stocks, it becomes clear that we’re all just making educated guesses. That's exactly what a startup is — an educated guess. On the tech side, I never had the mind for coding, so I found tech talent on campus and hired a development company.

What have been some of your biggest learnings?

At the beginning, it’s better to commit to solving someone's problem than making your idea. Then, talking to those people to find out exactly what they would want. We talked to a lot of people about what the app should be, but those weren’t necessarily people who experience the problem we were trying to solve.

Do you have a mentor who has helped to guide you in this process?  If so, who is and how have they helped?

I have advisors who have been in the industry, but mentorship takes continuous conversation, and that comes from family. My father’s an entrepreneur so I lean on him. My sister, Clio, who came up with the name “oVote", has a talent for pointing out challenges. The best mentors are the people who care, but aren’t afraid to tell you the difficult things.