There are times when I do not question the grand scheme of things, so when Pradeep Ghosh, an Ashoka Fellow, invited me to accompany him to Proto Village, I didn’t ask many questions. And that is how I was led to this intentional community in Anantapur, India where people choose to do what they want to do and when. Proto Village doesn’t prescribe to any vocation in particular, which also means that people who stay put here design their own activities adhering to Proto’s ethics and principles. There is no anxiety of execution either, but they live off and by the land, so their skin is in the game.

Kalyan, the co-founder of Proto Village, believes that they can create a REZ (Rural Economic Zone, more on that later). The normal course of education, which Kalyan pursued, left him with more questions than answers. To clear the muddle in his head, he decided to travel across India. He however put a constraint to his travel– he was going to travel without any money! For close to two years, he wandered, lived and worked with various people, observed their culture and practices and absorbed as much distributed local wisdom as possible. The learning was insidious for the engineer and management professional in him. At the end of his wandering, he triangulated the calls of his head, heart, and hands and gave birth to the idea of Proto Village. This concept was projected on to a 12-acre arid land which is now a living-breathing entity, not just for humans, but for all species who inhabit that space.

Proto is completely off-the-grid and uses wind turbines and solar panels to meet their energy requirements. The idea is to be mindful of energy consumption, because if even one person doesn’t use power judiciously, the entire community spends the night in darkness. The mountaineer in me hosts this particular intelligence in my body, one uses one’s energy with extreme caution knowing the uncertainties of the journey that we embark on. It was a profound point of connection in space-time for me, I could feel Proto with my body... 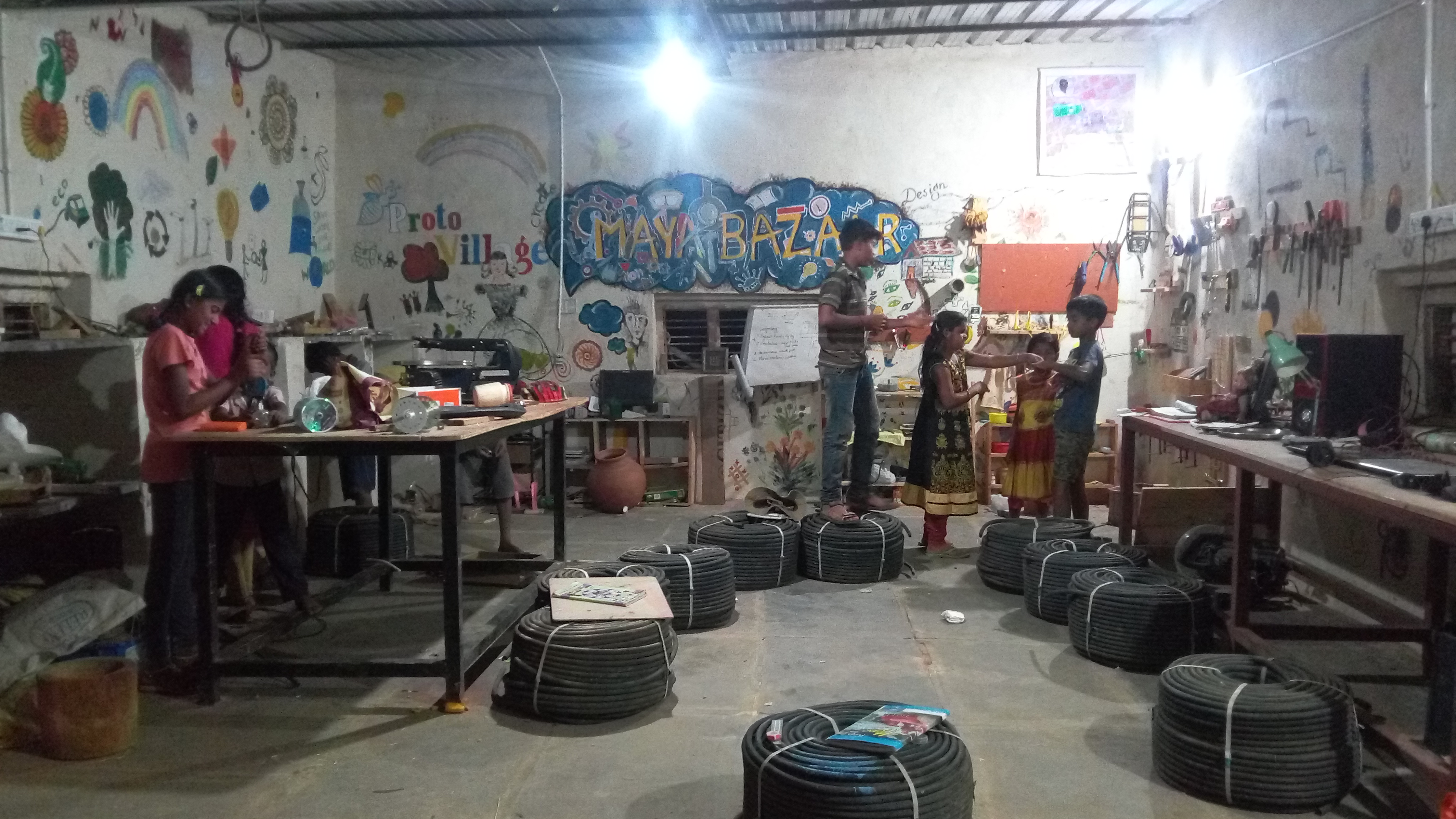 The inhabitants here really work with their hands, even if it is to make machines (they fabricated their wind turbine blades themselves!) that they will later use. Gandhian in the truest sense. The people in Proto village believe in being self-reliant and designing for resilience by following 9 basic requirements:

Food and Water Security: In 2014, the villagers started digging 8 ponds, 16 swales and 300 contour trenches. The aim was to accomplish as much as possible before the very unlikely event of a rain. They completed this project in one and a half years after they started, and on the very day of completion, rain filled up the trenches, swales and ponds! It was the perfect merger of fortitude and serendipity. They grow seasonal fruits and vegetables, and millets over two seasons.

Housing/Buildings: All constructions are earth-friendly, and buildings are made by the inhabitants themselves. Usually hexagonal structures are preferred because the hexagon, “...is the most resilient of structures. Hexagon reminds me of our inspiration, the bees, to remain true to our practice of resilience through collective intelligence”, says Kalyan.

Clothing: Two pit handlooms are used for weaving. They are also experimenting with various types of yarn/plant fibres and natural dyeing.

Healthcare: Emphasis is on preventive healthcare. The villagers plan to start Panchakarma (a five step Ayurvedic treatment) and telemedicine for providing medical care to nearby village clusters.

Energy: They use biogas for cooking and harness solar and wind energy for meeting their balance energy requirements. All buildings are designed to be highly energy efficient.

Education: The curriculum is based on:

Their curriculum and content so impressed the National Institute of Open Schooling that special permission was accorded to continue their own methodology from 9th to 12th grades. Parents of children contribute in any way they can be it by giving haircuts to children, or by providing millets for the meals. All parents join in for all festivities at school.

Connectivity: Encompasses the different kinds of connectivity needed for such an intentional community - through physical structures, as well as via newspapers, phones and the internet.

Trade: Firmly founded on the principles of Sarvodaya (upliftment and progress of every single person), which will eventually lead to Proto becoming a Rural Economic Zone. Importantly, the livelihood enables social cohesion and also conservation of environment.

Disaster Management: Involves constantly looking for ways to ensure they are drought and hunger proofed.

The REZ has 3 non-negotiables. The activities should be ecologically sustainable and locally appropriate. Raw materials should be sourced from nearby village clusters and work and supply chair system is in three tiers:

All products are sold under the name ‘GRAAMAM’, and the villagers take their products to the local market on a swanky yellow bullock cart. The youth are encouraged to sell products on Amazon and Flipkart. Their style-statement lies in what they sell on those platforms, and not on what they buy. Big doors swing on small hinges after all. 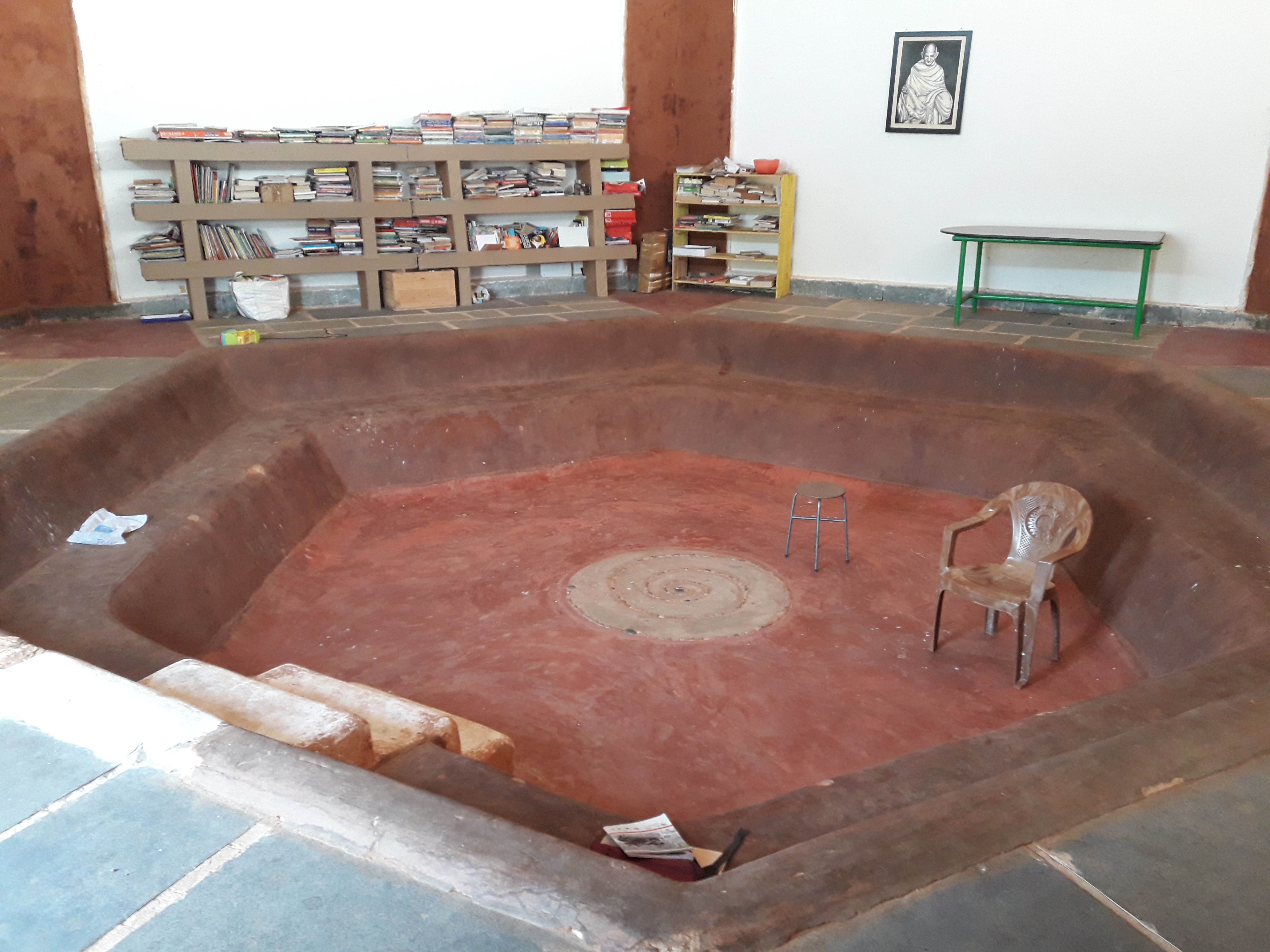 The submariner in me thought, Proto should be the norm after all: live within your needs and means. Submarines sail out with fuel and ration required for a specified number of days, calculated based on the number of people and the operations planned. If, in a submarine, we were not mindful and judicious about our consumption; we would be doing that at our own peril. Asking for more from mid-ocean was out of question, no self-respecting submariner would let his submarine break surface let alone ask for supplies! Proto brings that discipline and rigour to community living. Such a simple idea, spoken of often too, here was the Proto- way to be put it into practice, to abet endless consumerism, ensure equal distribution of resources and bring in equity in the world. As is to be expected, Proto’s balance sheet has a quadruple bottom line - they are in the black in the important three Ps (people, planet and peace), they need a little more time to move from red to black in the fourth P, profits.

Proto Village doesn’t want to grow to a size where things are unmanageable, instead wants to spread its ethos far and wide. To further that cause, they offer a Fellowship. Through this fellowship, a few people get to stay with Proto villagers for half a year, to learn and imbibe their ways. These Fellows will go far and wide to guide people in the art of self-sufficient community living: all part of the plan to scale-out rather than scale-up. The legacy is to not leave a legacy. No name, no fame, just mainstreaming goodness.