Amy Romano ’15 was sitting in a lecture hall during a women’s health course as an undergraduate student at the University of Michigan in 1996 when she heard the word that would come to define her life and career: midwife.

“That’s the first time I learned there was any modern thing like that,” she recalls. “I thought it was part of history.”

By 2004, Romano was a practicing midwife with a degree from the Yale School of Nursing. In 2013, she decided to go back to school, enrolling in Yale SOM’s MBA for Executives program. Her goal was to expand the use of midwifery, a proven strategy to reduce maternal and infant mortality globally, in this country, which has the highest mortality rates in the developed world.

In 2020, Romano founded Primary Maternity Care, a service design and consulting firm, to help rapidly open a freestanding birth center in New York City in the first wave of the pandemic. Romano and her growing team now work across the system to promote, operationalize, and scale evidence-based models including midwifery, birth centers, doulas and perinatal community health workers, group visits, digital and telehealth, and home-based care. Her clients and partners include CVS Health, the Purchaser Business Group on Health, Every Mother Counts, Texas Perinatal Services, the Institute for Perinatal Quality Improvement, 32BJ Health Funds, and providers and health systems across multiple states. Many of her projects directly address health equity, including working with Black Women’s Blueprint and other partners on an innovative care model in Brooklyn with a grant from Merck for Mothers, a program founded by Dr. Mary-Ann Etiebet ’03.

“Primary maternity care means basic care in every community for child-bearing people.” Romano says. “Our system is not oriented around access to first-line preventive care and public health measures for pregnancy, birth, and the postpartum period. Instead, it’s oriented around medical and surgical care for high-risk pregnancies. We need all those bells and whistles for people who do get sick, but not at the expense of investment upstream with community-based, first-level care.”

Romano’s interest in health dates to high school, when, as a student in the suburbs of New York, she worked as a peer educator, talking to her classmates about drunk driving and sexual health. In college, midwifery appealed to her as an expression of feminism.

“Midwifery is a profession that has existed in every culture around the world from the beginning of time, and it continues to redefine itself and evolve,” she says. “Yet at the root, it’s still about empowerment—holding space and creating safety for people to tap into their own capacity.”

After earning her undergraduate degree in women’s health and economics, Romano worked in health communications for a few years before attending the School of Nursing, where she earned a master’s degree in nursing with a specialty in nurse-midwifery. In 2004, she graduated and gave birth to her first child within a matter of weeks. The disparity between her own experience with home birth midwives and her clinical training at a hospital was “stark.” She had hour-long visits and personalized attention from providers she and her husband built trust with, while as a student she conducted 10-minute evaluations with people who had much more complex health and social needs and whom she knew she’d most likely never see again.

“That was a big grounding for the next phase of my career,” she says. “I was very much learning how to deliver the care while navigating it myself. I also became convinced that you shouldn’t have to opt out of ‘the system’ or have certain privileges to access relationship-based, high-quality care. It should be the default way of caring for everyone.”

By the time Romano went back to Yale for her MBA in 2013, she was already a nationally recognized expert in maternity care improvement and innovation. She had helped people deliver babies as a midwife in birthing centers, homes, and hospitals, and was serving as vice president of Maternity Neighborhood, a startup maternity care technology company. She had also helped lead a national, multi-stakeholder initiative to redefine maternity care in the United States and written a definitive textbook called Optimal Care in Childbirth: The Case for a Physiologic Approach.

“That was an exciting time in my career, and I really came out of it understanding that personally I was most interested in changing the care delivery system—making it easier to deliver the models of care that we know are good for people but are so marginalized from the system,” she says. But she wasn’t sure she knew how to do so.

Romano says she continues to draw on the lessons she learned in her classes. One highlight was State and Society, which focuses on the non-market ecosystem that surrounds businesses, exploring the role of government, advocacy groups, political movements, and the non-profit sector. The class included a simulation in which participants could choose whether to allow their business to increase revenue by polluting a lake that everyone in the community shared as a resource. Students learn that individual profit-seeking can lead to the depletion of a valuable resource, but if everyone cooperates, everyone can prosper. The principles at the heart of the simulation—trust, transparency, and collaboration—have been at the center of Romano’s career in maternal health.

“Yale really prepared me to work right at that intersection of business and society,” she says.

While at SOM, Romano and a classmate, Joseph Ianelli, ’15, also won first prize in the Healthcare Services Innovation: Case Competition for their proposal to expand CenteringPregnancy, a group prenatal care model she first learned about at Yale School of Nursing.

Since launching Primary Maternity Care, Romano has hired 10 people and expects to grow substantially in the coming year. She says she loves what she does.

“It’s sometimes crazy to me that this is not something everyone wants their life’s work to be,” she laughs. “I love birth. It’s such a privilege to be able to know that power in people and to witness it over and over again.” 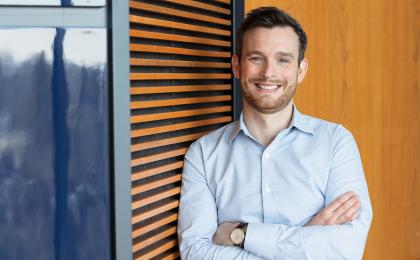 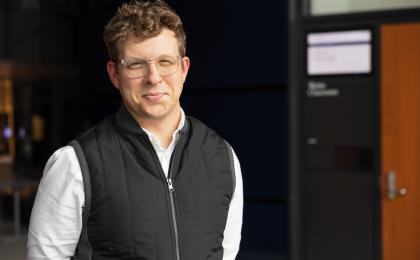 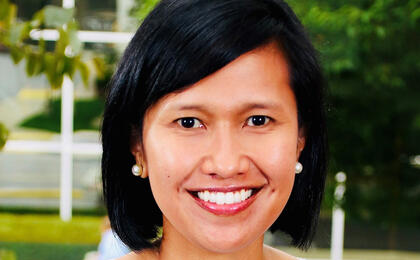