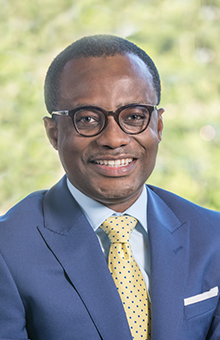 Kodjo Adovor ’18, whose investment firm funds healthcare and education infrastructure development in Africa, has been selected as one of AACSB’s 2019 Influential Leaders by the business school accrediting organization.

The founder and CEO of Kevi Capital, Adovor is a graduate of the Yale School of Management’s MBA for Executives program, with an asset management focus. He began creating Kevi Capital while he was still a student at Yale SOM.

“I’m very grateful,” said Adovor, who is a native of Ghana. “When I looked up the list of previous winners, it included a lot of people who’ve been very influential in the U.S. and globally, and I want to live up to that ideal of selfless leadership.”

In its announcement, AACSB said that Adovor epitomizes Yale SOM’s mission. The organization described Adovor’s work this way: “Adovor’s launch of Kevi Capital will most certainly have a positive impact on an area that he feels passionate about. His ultimate professional goal is to have a fund that will invest in education, healthcare, and entrepreneurship in Africa and connect Africa to the African diaspora.”

While at Yale SOM, Adovor co-created co-created the inaugural Yale Impact Investing Conference. Poets and Quants named Adovor to its 2018 list of the Best Executive Masters of Business Administration students.

Adovor said that his Yale affiliation has helped pave the way for the projects he’s working on now.

“In the real world, people Google you, and the Yale name precedes me, and it makes it a lot easier,” he said. “I’m trying to bring more people into the fold who want to help make people’s lives better.”

Adovor’s experiences launching his company were turned into the subject of a Yale SOM case study, titled “Kevi Capital: Starting an Africa Infrastructure Fund,” which is taught in the school’s Commercial Real Estate course.

“My passion coincides with Yale SOM’s,” Adovor said. “The school really lives up to its mission of educating leaders for business and society.”