Holy smokes. In the blink of an eye, its been a month since my last update and my internship at the United Way is coming to an end. Since my last entry a ton has happened. First - the job stuff. My internship with the United Way has been a fantastic experience. I've learned a great deal and the summer has confirmed to me that I definitely have a place in the nonprofit world. Though my internship is over this Friday, today was really the culmination of my summer's work. I had the opportunity to present to the Senior Leadership team of the United Way... a pretty big deal since its very hard to get them all in a room at one time. My group had 45 minutes, I was assigned 10 of those minutes and at the table were the CFO, COO, Chief of Staff and several Executive VP's of the United Way of America. Oddly enough I felt pretty calm and wasn't nervous, and my immediate supervisors thought the meeting went very well. Positive reinforcement definitely breeds positive vibes about a workplace, and today I probably feel more upbeat about my summer experience than I've ever felt over the past 10 weeks. Yes, the nonprofit world has been kind to me - The work is challenging, the people are nice, my bosses are smart, the work/life balance great and the job definitely taps into my skills and my abilities as both an ex-banker and an MBA. Awesome. As for whether I want to stay with the United Way, the short answer is... yes... kind of. While this summer I worked with the United Way of America, for my full time job search I think I'd be more interested in working with a local United Way organization. UWA is just too removed from the actual work in the communities, and I definitely want more "hands on" contact to the agencies and community impact work of the United Way system. In addition, I think its time to give into the long standing urge I've had to move to the west coast. I absolutely love Seattle, San Francisco, San Diego and Vancouver and for the full time search I've decided to really focus on job openings on the West Coast. In that light I'm happy to write that I actually visited the local United Way in Seattle, part of a 3-day weekend that I recently took to visit fellow study group members in Seattle (Ip at Microsoft) and Portland (Alissa at Nike). Friday morning was spent at the United Way's office, meeting a few people and doing the informational interview thing. It was useful and I hope to keep an ongoing dialogue with that office, as well as reaching out to the United Ways in my West Coast hit list. On the "non-work" side, my mini vacation to the West Coast was a ton of fun. Pictured in the collage are images from hiking at Mount Ranier in Seattle (2 hour hike), and Mount Hood in Oregon (6 hour hike). Both hikes were great and I really enjoyed having a mini reunion with my study group peeps. Of course, the rest of the study group are interns in New York City, and I paid a visit to the big apple the weekend before my West Coast visit. It was great seeing some SOMers in NYC. Other than that, other weekends in DC captured in the collage below have involved bowling, lots of good eating at restaurants all over the place, and 2 crazy sessions of Karaoke (on work nights), which have been fantabulous. 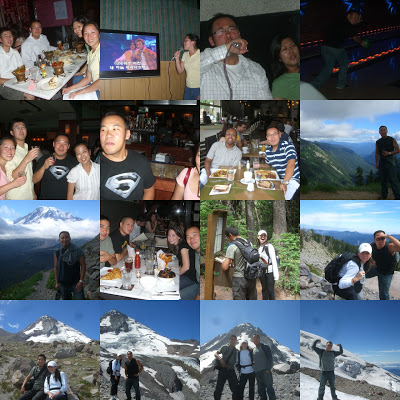 That's all the updating I have for now. To all the incoming first year SOM students, have a great orientation. And to all my fellow "second years" (wow its weird to call myself a second year), see y'all real soon!