An alumna of the MBA for Executives program, Abston was responsible for, among other efforts, introducing groundbreaking finance-industry heavyweight Mellody Hobson to SOM students this past year.

Jamila Abston ’17 received the 2018 Yale SOM Alumni Relations Award for Outstanding Volunteer Leadership at the Donaldson Alumni Leadership Summit on May 4. The volunteer awards ceremony followed a keynote discussion with Indra Nooyi ’80 and Jeff Bewkes YC ’74 moderated by Professor Jeff Sonnenfeld. The Yale SOM Alumni Volunteer Leadership Awards recognize the extraordinary accomplishments of a few of the many ambassadors for Yale SOM—volunteers who have demonstrated a willingness to give back, a penchant for innovation, and a high level of service on Yale SOM’s behalf. 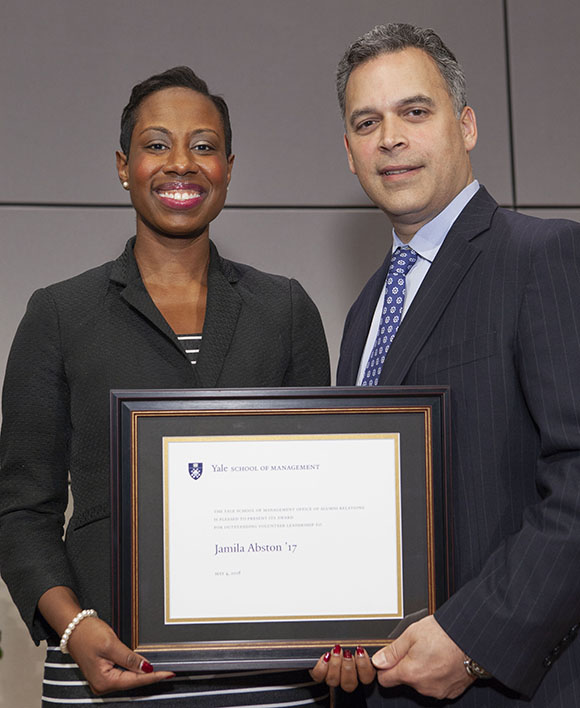 A leader, role model, mentor, and exemplary volunteer, Jamila Abston ’17 embodies the SOM mission of business and society, both professionally and personally.

Whenever the alumni are called upon by the EMBA admissions team for help, she is the first to respond. As an admissions ambassador in reaching out to prospective and incoming students, in participating at information sessions, and as a panelist for our Women’s Leadership Symposium, Jamila shares her passion and enthusiasm for the program with other candidates. She is also a role model for women in the industry, both in the public sector as a regulator and now as a partner at Ernst and Young, always championing community and inclusion efforts. She worked diligently to influence the diversity of guest speakers for the Asset Management Colloquium as a student and she continued this effort after graduation. Jamila introduced the SOM community to Mellody Hobson, president of Ariel Investments, a woman who has shattered barriers for women of color in the finance industry. Mellody’s talk was opened to the entire New Haven community, and students from across campus together with New Haven residents packed Zhang auditorium to hear from one of the most successful African-American women in the U.S. This would never have happened without Jamila’s persistence and charm.

In addition to her many volunteer roles, she is simply brilliant and hardworking and personable, making her mark both in her industry (she was appointed wealth and asset partner at the age of 35) and on the EMBA program as evidenced by her inclusion in the Poets and Quants 2017 EMBA “Best and Brightest.” We are thrilled and lucky to count her among our most passionate EMBA alumni volunteers. Jamila is going places, and the Yale brand is stronger for being associated with her.

For all that you do for SOM, for the EMBA program and for our alumni, we thank you, Jamila.