Orientation for the Class of 2019 began on August 14, and the new students are already off and running this week with their Managing Groups and Teams class. Based on both their class profile and their early days here on campus, this year’s group appears to be one of the strongest we have welcomed to Yale. 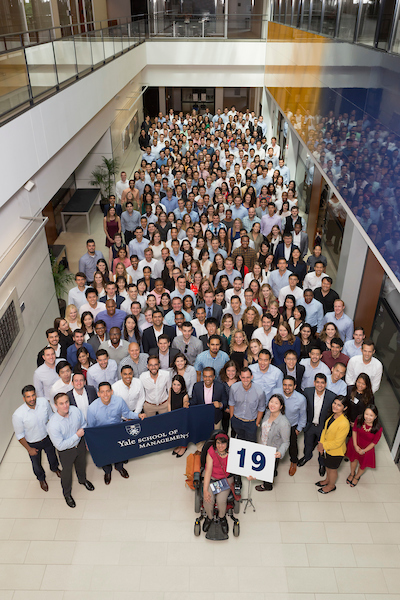 They dance (from ballet to Bollywood; hip-hop to hula) and play music (including guitar, cello, piano, viola, flute, and guzheng, to name a few instruments). Some are professionals, including a saxophonist who graduated from the New England Conservatory, a violinist from the Royal Conservatory of Music, and a drummer who won a silver medal in the world’s fastest drummer contest. Others are not, including an amateur Romanian pan flute player and an aspiring ukulele player. One has perfect pitch, while another describes himself as a failed a cappella singer.

They are athletes, including an NCAA national swimming and diving team champion and World University Games gold medalist, a Chinese National Women’s single and doubles badminton champion, a third-place finisher in the Thai national table tennis championship, an Austrian professional handball player, a New England Adult Equitation champion, an Academic All-American in Nordic skiing, an All-Ivy League selection in volleyball, a member of the Bruneian national cricket team, captains of the Army baseball and hockey teams, a silver medalist in the Rhythmic Gymnastics World Championships, a representative of Malaysia in the World Junior Tennis Championship, a captain of the 16th-ranked ultimate Frisbee team in the U.S., a nationally ranked U.S. fencer, and a U.S. Collegiate Ballroom Dance champion.

They run marathons and half-marathons (one on snowshoes), duathlons, triathlons, long-distance triathlons, and even a 205-mile relay race. They travel—one to 48 different countries, others to fewer. One student likes to travel with her stuffed llama, Lola; another with Layla, his self-described “half-horse, half-Golden Retriever”; yet another likes to camp “beyond the reach of cellular signals.”

One of them placed eighth in the National Spelling Bee; another won the best dressed award in the Korea Wall Street Marathon Competition. One has read every issue of the New Yorker from 1936 to 1946, and another won the bronze medal in the International Mathematical Olympiad. We have others who received honorable mention in 34th International Physics Olympiad, first prize in the Chinese National Olympiad in programming, and first prize in the Chinese National Olympiad in information; ranked in the All-India National Science Olympiad; and reached the national round of the Chemistry Olympiad.

They are foodies—one likes finding under-15-minute recipes; others enjoy bread baking, gluten free baking, central California BBQ, and pour-over coffee. One hosts competitive, themed potlucks—and for those who aren’t into that, another enjoys hole-in-the-wall restaurant exploration.

By the numbers, 45% of the Class of 2019 holds passports from a country other than the United States, with 48 different countries represented overall. Women make up 43% of the class, and U.S. students of color 27%; 12% are underrepresented U.S. students of color. The average GMAT for the class is 727, and the average GPA is 3.67 on a four-point U.S. scale. Students come from a range of academic backgrounds, from engineering to the arts, including one who double-majored in neuroscience and saxophone performance. They’ve received various academic awards and honors, from magna and summa cum laude designations to Phi Beta Kappa honors, Fulbright Fellowships, and Gates Millennium Scholarships.

Their professional credentials are equally diverse and impressive, covering all sectors and a range of industries, including large financial institutions such as Bank of America, Morgan Stanley, and Goldman Sachs; major consulting firms like McKinsey, BCG, and Deloitte; and a host of other employers such as Cummins, Google, Dropbox, Schlumberger, the Peace Corps, World Bank, Unilever, and many others. The class includes a Colombian tax lawyer, a Saudi hedge fund manager, professionals from public finance to the Public Theater, architects, patent holders, doctors, lawyers, an Israeli tank commander, a naval aviator, and an Army Ranger.

Despite this incredible diversity, what the members of the Class of 2019 all have in common is their aspiration to fulfill the school’s mission to educate leaders for business and society. We are excited for them to begin this journey!