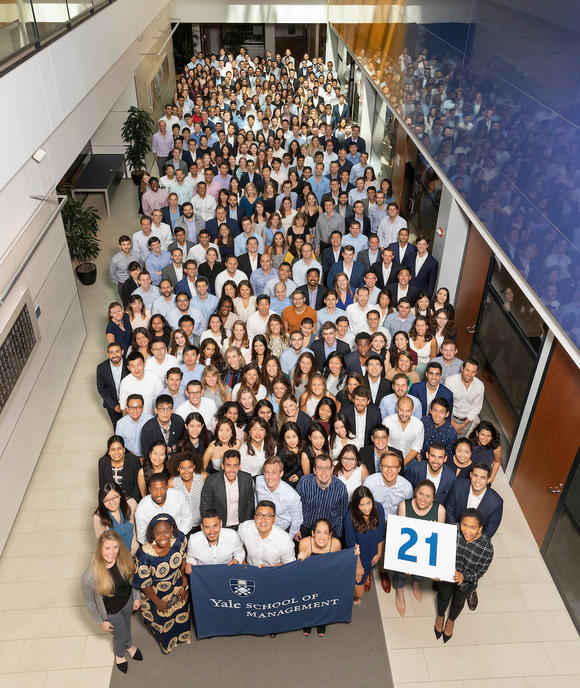 August 12 marked the beginning of orientation for the Yale School of Management MBA Class of 2021. The group that arrived on campus is as diverse and accomplished as any we have welcomed to New Haven.

Among them are musicians who play instruments as varied as violin, piano, guitar, ukulele, drums, saxophone, and cello—and one who plays carillon (a bell tower instrument) and has attained professional level certification through the Guild of Carillonneurs in North America. They dance—from ballet to belly to Bollywood. And they sing—a cappella, contemporary, and opera, among other genres. They are varsity athletes and captains across a range of sports, as well as marathoners, triathletes, and Tough Mudders. In addition, the Class of 2021 includes an Olympic equestrian triathlete, an Olympic skeleton/bobsledder, a professional soccer player, a national cycling champion, and a national Alpine skiing champion. No less enthusiastic are the devotees of Ultimate Frisbee, kickball, dodgeball, and roller derby.

By the numbers, 44% of the Class of 2021 holds passports from a country other than the United States, with 47 different countries represented overall. Women make up 42% of the class, and U.S. students of color 29%; 13% are underrepresented U.S. students of color. The average GMAT for the class is 721, and the average GPA is 3.64 on a four-point U.S. scale. Students come from a range of academic institutions (186 different schools are represented) and backgrounds, from engineering to the arts. Forty-one are first generation to college, while 62 have earned a previous graduate degree. They’ve received various academic awards and honors, from magna and summa cum laude to Phi Beta Kappa to Fulbright Fellowships and Gates Millennium Scholarships.

Their professional credentials are equally diverse and impressive, covering all sectors and a range of industries, including positions at large financial firms such as Barclays, J.P. Morgan, and Goldman Sachs; major consulting firms like McKinsey, Bain, BCG, and Deloitte (the most common pre-MBA employer); and a host of other employers such as Apple, General Motors, Unilever, Lincoln Center, the Metropolitan Museum of Art, the UN World Food Program, the Federal Reserve Bank, and many others. The class also includes members of all branches of the United States military.

What brings these incredibly diverse members of the Yale SOM Class of 2021 together is their aspiration to fulfill the school’s mission of educating leaders for business and society. We are excited for them to begin this journey!