“I’m always doing things I can’t do. That’s how I get to do them.”
—Pablo Picasso

Where was Papa? I wanted to ask him how come this dream (nightmare) wasn’t ending and why was I in this uncomfortable, ugly hospital bed with my limbs in metal braces in the first place. Where on earth was I?

Why was I not in my apartment in the East Village living the young millennial’s life in NYC?

Soon enough, a deeply fraught looking, as I imagine he must have been, Papa, was standing by my bedside. He must have been uneasy at being asked a question that required an answer that was bound to rattle me.

“Pom, Mama and I have already explained to you that you are now in New Delhi, in a hospital.”

“You’ve had a bad accident.”

“But now you are safe here, with Mama and Papa.”

Alright, so I’d had an accident. But what was all this about Uganda? A serious accident. I had completely blanked out on the fact that I had given up my Wall Street job in June for an exciting life working with women farmers in Uganda. And it was now January 2011. What had happened to the rest of 2010?

Just how serious I wouldn’t know until I went through the onerous rehab in hospital, and then the unending numerous doctors’ appointments I would go to over the next five years. In Delhi, in New Haven, in D.C., back and forth between India, and the US.

And now, six years after the accident, people are stunned when they hear of the journey I have been on—from being comatose for three long months with an unmoving, practically paralyzed right arm and leg to being admitted and now enrolled at Yale University in pursuit of my MBA.

The honest truth, however, is that much of my grappling with my situation is due to my ignorance, as well as the doctors’ ignorance of the functioning of the brain. They couldn’t tell me how much I’d recover or how long it would take. However, after the initial hazy months in which nothing seemed too real, I came to know myself and though my body did not feel at its finest, I thankfully and inexplicably still clung on to my dreams. “I must get my life back on track,” I thought.

Why not pick up what I had begun doing before my accident; my plan after Wall Street had been to work at an NGO in Uganda for a year, and apply to business school. Given my interest in non-profit management, Yale School of Management was the automatic choice. I was only at the beginning of my recovery, a year after my accident, and surely in another year’s time, I’d be “hopping, skipping, and jumping.” I truly thought that in a year I would fully recover.

That decision did not then sound as monumental as I, now, fully aware of the context, realize it was. My speech was slurred, and people, including my family and close friends, had difficulty understanding what I said; I was not able to take two steps without losing my balance and falling; I had to be helped to stand up from any chair I sat down on, as my muscles were too weak; I had unrelenting chronic pain shooting down my right leg; and I had hour after hour of physical, speech, and occupational therapy. Yet, neither my family nor my friends ever dissuaded me from pursuing my dream. Like me, they assumed that I would be back at it soon, but they very well could just have waited for that day to arrive and instructed me to sit back and take it easy up until then.

Through all this, it’s not like I ever made the decision to be “courageous,” “determined,” or “resilient”—the words I heard as people described my situation. I had come to learn that life really was unpredictable. The world as we know it could change in the blink of an eye, and this new immobile, unintelligible life was the life that was in actuality my own. I was just trying to make it an enjoyable life to live.

A few months later, I found out I was admitted to the Yale School of Management.

The enabling system of American universities is life altering, and it is what has allowed my life to be transformed. It all started with Yale telling me that I could enroll whenever I felt ready to attend graduate school.  I finally realized that I needed all that exasperating therapy and would not be able to make time for anything besides that. Because I couldn’t tolerate a life focusing only on myself, although that was important, I had resumed my work for the global non-profit I was working for in Uganda, but now on a remote basis in D.C.

As I contemplated actually going to school at Yale, waves of doubt and insecurity crashed violently into me—could I really take on such a challenge of enrolling in an ivy league university—and that also after suffering a severe TBI? Could I keep up with my evidently smarter peers? What would they think of me? Was there any such precedent to serve as inspiration and motivation for me? I began to Google my life away. The sea grew fiercer.

A chance conversation over coffee one afternoon with dear friends in D.C. convinced me that my fears of failing were even worse than going through life knowing that I hadn’t even tried. I had to assess whether I felt confident about trying given all the accommodations Yale could make for me. At first, I shuddered in fear at the possibility of failing out—how could I let failure define who I was? That wasn’t who I’d been, was not who I was, nor who I would allow myself to be. Due to my being in D.C., and the National Institute of Health (NIH)  being in striking distance, it was inevitable that my family would arrange for me to be seen by experts in the study of traumatic brain injuries. After numerous tests, the doctor came to a decision that I had his blessing to return to graduate school if I wished to, although it would be extremely challenging. His recommendation was that I attend school, but only take half the course load that other students were taking. Because of my injury’s effects on my cognitive speed, in compliance with the Americans with Disabilities Act, Yale accepted my doctor’s recommendation.

I also had to come to accept that I did have a traumatic brain injury, and not to feel ashamed of the truth. When I told people  who asked what had happened to me, admitting that it was my brain that was injured felt like a confession of some sort. It felt to me as though I was telling people that I functioned at a lower IQ than they did, that I was “dumber” than them, all of which were shown by the tests at NIH to be untrue. I am fortunate that my brain injury had no such effect. The complexity of the brain is such that no two people can have the same injury.  After what seemed like forever, I came to feel comfortable in my own skin once again, and now am only too happy to tell the curious that I had a traumatic brain injury, largely due to where I am now.

However, there is yet another enabling factor that has allowed me to reach this turning point: that is the enabling support system and close-knit feature of the Indian family. My family’s support and the sacrifices they’ve made for me have not only allowed me to live another day, but have also brought a smile back to my face.

Having completed my first semester at Yale, I can say that I have been enabled in more ways than can be imagined. The prevalent feature of my attending Yale is that it has augmented my belief in myself and what I am capable of. Yale SOM’s unique student body, my peers, play a lead role here. I soon found myself surrounded by a group of amazing people—people I can now call my friends. We connected in so many ways: over dinners at delicious New Haven restaurants or homemade Indian dinners at my own home; as we struggled over countless seemingly impossible problem sets in the Evans Hall student lounge; at one of the many events held in the university; for fun and games at Trinity bar just below where I live; and by just plain old texting. I connected with the Yale SOM students in a way I never anticipated connecting with business school students. 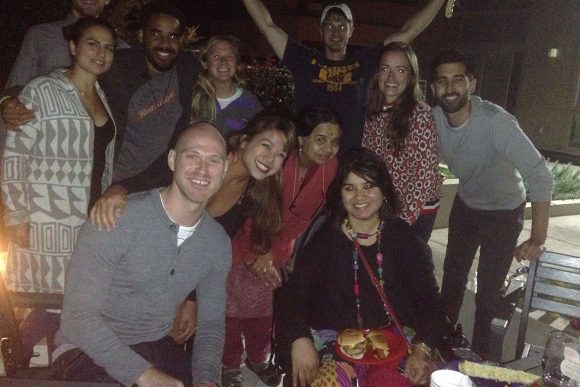 This was a welcome change after the previous six years largely spent at home or in intensive rehab. Learning brand new material is also a very welcome change, particularly as I now have a better, first-hand understanding of how the brain functions—grappling with new, arduous class material only quickens neuro-plasticity, which will help my brain in its lifelong recovery process. The professors at Yale are, not surprisingly, among the best in their fields. They have also been remarkably understanding and supportive of my situation, offering to help me outside of class if I needed. But, as I have mentioned, the enabling system at American universities is such that I did not have to take the professors up on their kind offer—the university offers every student the resource of tutorials, which it sets up with students who have already taken the class and passed with flying colors. I felt wonderful not having to ask for more help than what others were getting.

To become the change agent I desire to be, I must first maintain this belief in myself and be unfazed from dreaming big. After all, if your heart is still beating, you have the time for dreaming. And dreams become reality if you believe they will.

“Look to your right... It is the path back home. If you choose, you can take it. It is safe, easy, and comfortable. You do not have to work out or fight or do anything else you do not want to…

“Or you can keep moving forward. I will not lie to you. I cannot predict what may become of you. It will require a lot of training, hard work, study, and danger. But in the very end, you will know strength. I swear it. You might just become someone who will make a difference in the world.”