The student-led Design and Innovation Club helps students explore career options with a focus on innovation. Last summer, some students in the club landed internships at established design and innovation consultancies—including SYPartners and Continuum—while others applied systematic “design thinking” principles within other industries. In a panel sponsored by the D&I Club on September 17, students shared what they learned. 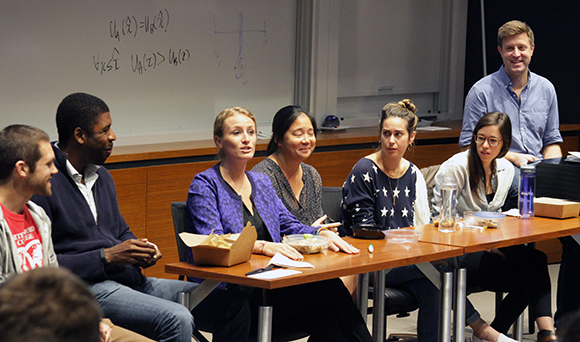 "This summer I was working on designing some new products. I couldn’t come to my manager or the director and make a case for including a feature or tailoring a promotion without first having some nugget of evidence from testing with users that this would address a need they have. That was part of the DNA of the company. It’s a user-centered place… One thing we do in Innovator is talk about how to reframe a question to understand what’s really the need of the customer. Having that mindset really helped me communicate effectively."

"There was this culture and ethos of just trying stuff and it not needing to be perfect, just iterating over and over again, putting a good enough version out there and getting some feedback on it quickly and then making it better. You’re not afraid to fail. I had come from a place that was the opposite of that, so the culture really helped me. Just the fact that I came in as an intern and had all these crazy ideas, and they said, ‘Go, try, do, see,’ was empowering."

"As an American having worked only in American companies coming into an almost exclusively Indian office, I felt the cultural meld allowed for a kind of cross-contamination of ideas… I don't come from a design thinking background, so things I learned in Innovator helped. I would frame questions differently and try different approaches and viewpoints…When you work for a really small organization or a very flexible organization, it allows you to build your own processes if there aren’t very structured ones in place."