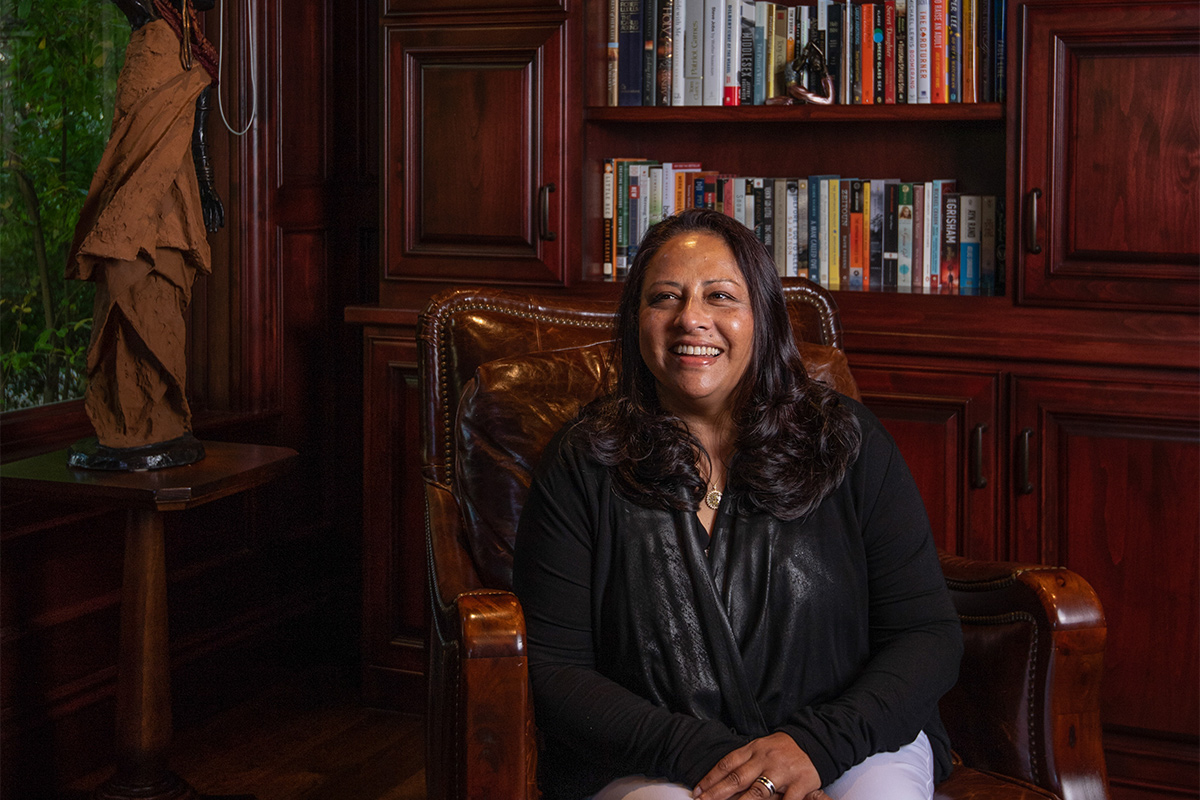 “You become a Roman in Rome,” says Usha Nesamoney ’90 of her peripatetic childhood. Her father’s work as an offshore petroleum engineer meant she grew up in Nigeria, Libya, India, Saudi Arabia, the U.K., the U.S., and Singapore. As a result, she became comfortable with, as she puts it, “adapting to new cultures, while retaining the values you were brought up with.” Her adaptability has stood her in good stead.

“I did my undergrad in India,” she explains, “then worked in the U.K. for a small accounting firm, then moved to the U.S. to join my family and started working for Price Waterhouse in New York.” Business school seemed a logical next step. She was drawn to Yale SOM because of its diverse student body, collaborative atmosphere, and global focus.

Once at Yale SOM, she came to “cherish the community. There was diversity not just in occupations but in age, perspectives, and nationality. There was true diversity.” She also found that “the support from the faculty—and the TAs—was amazing. They were the most caring, thoughtful, intelligent folks.”

Soon after graduation, she learned just how caring. She’d landed a permanent position with the firm where she’d done her summer internship, but then “they had a wave of layoffs. It was a little unpleasant to find yourself without a job after a couple of months, when you’ve turned down other offers.” But the Yale SOM network came to her rescue. Thanks to one of her TAs, she got a job with Booz Allen’s marketing group in San Francisco and has been in the Bay Area ever since.

After four years with Booz Allen, she wearied of the travel that consulting entails, so signed on with one of Booz Allen’s local clients. A year later, she joined Charles Schwab’s online marketing group and was quickly promoted to vice president. She also got married, to one of the co-founders of Informatica, a leading provider of enterprise cloud data management. With the intention of starting a family, she says, “we moved to the suburbs, got a dog, all that kind of thing.”

Then came what she calls “a defining moment.” She and her husband were working late one Thursday night. Both, coincidentally, stopped for dinner at the same burrito place.

They started mulling what they wanted from life, and Nesamoney decided to step back to working part-time. “I’ll be honest,” she says. “That was hard for me, as a person who had achieved success and was career oriented.” But she found working part-time even harder. “Many people make it work, but as ambitious and as goal-oriented as I was, it was very hard not to be in meetings, to have to let go of things.”

When she became pregnant with their daughter, she decided to step out of the workforce entirely, a decision that was affirmed when their daughter was born eight weeks early and faced some health issues—and again a few years later with their son.

But ironically, even though Nesamoney was no longer in the paid workforce, “this is where my SOM education came in really handy,” she says. She got involved in a family-funded foundation and took on a number of roles with nonprofits. “I still had some intellectual stimulation,” she explains, “I was meeting people; there was purpose to what I was doing. It was just a different focus.”

She has served on the boards of both her kids’ schools and on the Stanford Medicine Community Council. She joined Yale SOM’s West Coast Advisory Board. She ran a program that brought 25 kids a year to India, “to give them a global experience.” And she worked closely with the American India Foundation, “to do what we can to disrupt poverty there, because both of us are from India,” she explains.

“I felt, ‘This is what SOM taught us.’ It taught us the basic skills of running an enterprise, no matter whether it’s for-profit or not-for-profit. Your mindset is not about one pathway. I was able to adapt and leverage my experience to add value wherever I was.”

She and her husband have also funded two scholarships at Yale SOM—one for an MBA student (out of appreciation for the excellence of her education), and one for a student in the Master of Advanced Management program (“because we truly relate to the concept of global leadership”). They’ve also supported SOM’s entrepreneurship program.

Nesamoney says they recently visited New Haven. “My husband, who did not to go to SOM, said, ‘I get now what you’re saying.’ The SOM experience sets you up for life, not just for your next job.”