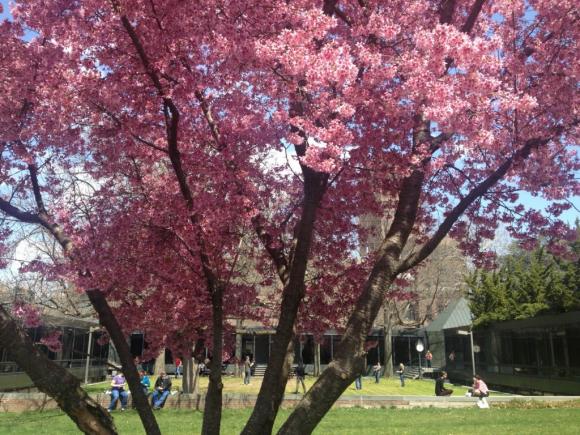 Here is the much-delayed follow-up to my first post on Japan, Frames, Trains, and Automobiles. I really wanted to get this to all of you right after our International Experience ended, but, alas, the craziness that is the first week of Spring 2 put a hitch in that plan. Upon returning from Japan, (I had a 10-hour layover in Los Angeles, so I went to see my friend Kimi in Santa Monica and rode a roller coaster on the beach before returning to JFK), we had about 36 hours to adjust to jet lag, read a 250-page book on the gun industry for State & Society, prepare a raw case for a class taught by none other than our own Dean Snyder, and become a master design thinker, not to mention buy new groceries, do immense amounts of laundry, revive our parched plants, and reconnect with each other after a 3-week hiatus. So, I apologize for just getting this out to you now, but I hope you can also empathize with what we were going through.

Aaaaaaanyway. We last left off with your intrepid SOMers getting to Japan and touring auto factories and bullet train control rooms. We finished off the week by visiting one of the primary plants for JFE Steel, Japan’s second-largest steelmaker. Now, it’s a damn shame that we were again prohibited from photographing the inside of the factory, because it was one of the coolest experiences I’ve ever had. While Nissan and Toyota were marvels of modern technology, and truly highlighted the process and quality concepts we’d be studying with Professor Swersey, the JFE factory appealed to the part of me that is still a twelve year old boy. Seeing a 20-ton cauldron pouring scrap iron into a furnace with flames leaping several hundred feet high, and then molten steel being poured and cut into bars, I couldn’t help but think of the days I spent obsessed with Greek mythology and Hephaestus. Even more astounding, the bars (about 5m long) were then rolled out into strips that were nearly 3km long through a series of ridiculously complex machines, compressors, and water cannons. I’d always been the type of person who never really paid any attention to where the materials around me came from, except to have a general idea of what commodity prices were currently hovering at. To see where this steel was coming from, and to learn that this was some of the most high-quality steel in the world, used in sophisticated electronics, automobiles and trains, and some of the grandest construction projects around the globe. Well done, JFE – you not only surpassed my expectations, but you helped me reframe my worldview to see supply chain and manufacturing in a new light. 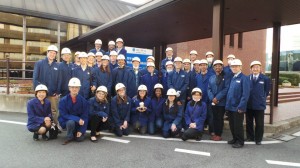 After JFE, (and a visit to the Uniqlo headquarters, in which they essentially offered all of us jobs, which I can't talk about here, because I'm obsessed with Uniqlo and it'd take weeks to get through a post), we had a full weekend off, and we took advantage of all that Tokyo had to offer. A group of students went off to explore the Imperial Palace and surrounding areas, another group went to a district that had the highest number of independent book stores of any neighborhood in the world. We had folks who explored Disneyland Tokyo, and those that toured Tokyo’s culinary scene. For me, I took some time to go to the national Kabuki theater, (culturally significant, but perhaps not my cup of tea), and to a baseball game, the Swallows of Tokyo vs. the Dragons of Nagoya. It was a pre-season game, but that didn’t dampen the palpable excitement within the stadium. I really wanted to witness baseball in Japan, and these fans did not disappoint. The villainous Dragon fans (we rooted for the Swallows) taunted our section with bugles and choreographed dances every time their team scored a run. Meanwhile, for each Swallow player who crossed home, our entire side of the arena would open our kid-sized umbrellas and dip them up and down so that the stadium looked like it was flying. Even better for a foodie like me is that one of our Japanese hosts, Professor Takahashi, had brought snacks and bento boxes for each of us – I don’t know why food tastes so much better in a baseball stadium with a cheap beer in hand, but the effect is easily doubled in Japan. 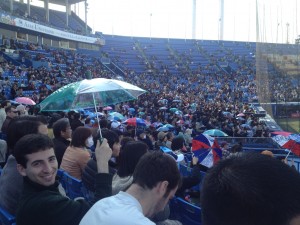 We then left for Hamamatsu, (a ‘small’ town of ‘just’ 800,000 people), where we visited the Yamaha piano and wind instrument factories. This was a cool stop, particularly because we were able to see a production line that seamlessly blended modern production techniques with old-school hand-finessed detail work. It also helped that our tour guide was one of the funniest and most charming young ladies we’d had on the trip. The best part was that were able to test out of some of Yamaha’s products, including a custom piano built for a world-famous pop star, (here’s my guess, the picture is below), electric violas and cellos, soundless drumkits, and bassoons, (did you know that a bassoon takes about 3 years to make? Seven if you account for the aging of the wood.), my former instrument of choice. 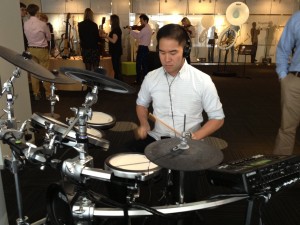 We ended our trip in Osaka where we had the opportunity to watch part of the Sumo Wrestling Championship (super fun, one of the highlights of the trip). And we spent a couple of hours on our last day debriefing our experience with Professor Swersey. Let me just take a second to talk about Art Swersey. I know I already talked about what a great guy he is in my previous post, but since then, my esteem for the man has only increased. He was an incredible mentor and guide throughout the trip, and he took the time to get to know each of us on an individual basis – sitting with us on the bus and the train, playing games of ‘Mafia’, going to Karaoke until the wee hours of the morning, and always knowing when to crack a joke or tease someone mercilessly (more often than not, that person was me). After we got back, he’s had the group over to his house, treated us to Korean BBQ and blueberry pancakes, and has just been generally wonderful. Here’s to Art, and to the lucky first years who’ll get him for Probability next year! 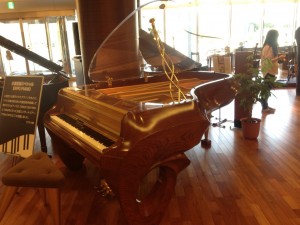 However, it did not stop there. A group of us went on a post-trip in Kyoto, which was the most beautiful, historic Japanese city by far. We actually ran into George Newman, our Employee professor, and his wife, Tori Brescoll, one of our LDP professors, at the Kyoto train station, (I'm not going to post the photo, because it's a particularly bad photo of all of us), and spent a couple of nights walking around Kyoto, visiting temples, including the Kiyomizu-dera, sake bars, clubs, and doing some last-minute shopping. It was a great way to decompress after the trip, and a good way to relax before coming home.

That’s it for Japan. I had a tremendous time learning about operations and Japanese culture, customs, and economic downfall and renewal. Let's hope the trip keeps going strong for as long as the International Experience keeps going. 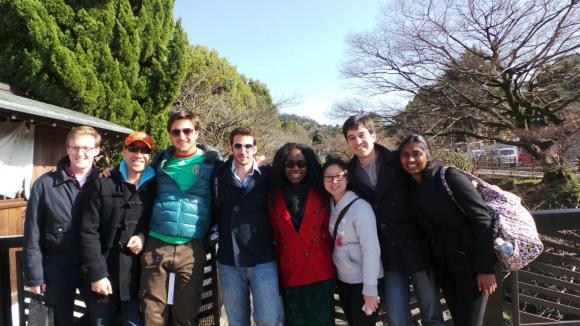