The award to Scott Morton is one of two investments that Knight Foundation is making in Yale projects as part of a wide-reaching effort to fund new, cross-disciplinary research and develop a field of research around technology’s impact on democracy. 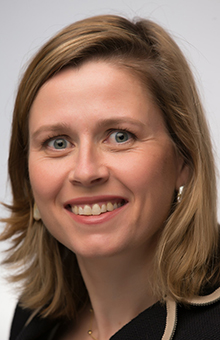 Fiona Scott Morton, the Theodore Nierenberg Professor of Economics, has received an investment from the John S. and James L. Knight Foundation to study competition and antitrust in the digital economy. The funding will support the launch and development of the Thurman Arnold Project at the Yale School of Management.

The Thurman Arnold Project, which is also being funded by Omidyar Network, will serve as an academic gathering place for students, researchers, and policymakers from across Yale to examine the evolving antitrust and competition challenges posed by the modern economy, with a particular focus on digital platforms and their unique business models. The project will support research, conferences, and other gatherings for intellectual exchange around these fast-moving issues.

Scott Morton works extensively with colleagues and students from Yale Law School and other parts of the university, and, she said, the new project will strengthen these cross-campus ties. “A thorough understanding of the forces diminishing competition in American markets requires economics at its root, but it also requires perspectives from law and policy. The output of our work will be used by policymakers, legal scholars, and others, so it’s essential that we bring together people from Yale SOM, the Law School, the College, and beyond.”

The project is named for Thurman Arnold, a onetime member of the Yale Law School faculty who served as head of the antitrust division of the U.S. Department of Justice during the Franklin Delano Roosevelt administration.

While the projects taken on by the Thurman Arnold Project will shift as demand and needs arise, its activities will be focused on advancing the understanding of how digital platforms, such as Facebook, Google, and Amazon, are changing the nature of economic competition and innovation, and what those changes mean for consumers, in terms of price and the variety and quality of content that is available to them. The goal is to inform effective enforcement and regulatory efforts that can protect consumers and content producers by maintaining competitive markets.

“Antitrust enforcement and competition policy are lagging behind academic knowledge, and new energy is required to bring these issues to public attention and into the policy arena,” said Scott Morton. “Now is a critical moment to provide well-founded explanations for how the digital economy works for, or against, competition on price, quality, and innovation.”

The award to Scott Morton is one of two investments that Knight Foundation is making in Yale projects as part of a wide-reaching effort to fund new, cross-disciplinary research and develop a field of research around technology’s impact on democracy.

The other Yale recipient is Jack Balkin, Knight Professor of Constitutional Law and the First Amendment and director of the Information Society Project at Yale Law School. Balkin’s Project on Governing the Digital Public Sphere will produce legal and policy recommendations to improve the functioning of the digital public sphere. Looking at external and internal governance, the initiative will study topics from antitrust and privacy to content moderation and digital propaganda.

Omidyar Network is funding the Thurman Arnold Project as part of their efforts to update antitrust research and theory to better meet the challenges of the digital economy. Scott Morton and Omidyar Network share the goal that the research and insights generated by this initiative both impact the academic field of antitrust and reach a broader audience.

Scott Morton has become a prominent voice arguing for the importance of utilizing antitrust policy and enforcement to maintain competitive markets. In her academic work, she has focused on empirical studies of competition in areas such as pricing, entry, and product differentiation in a range of industries, including pharmaceuticals and internet retailing. She has recently provided expert testimony to Congress about competition in healthcare markets and the impact of digital platforms. Over the course of the 2018-19 academic year, she chaired a committee that studied the consumer harms caused by the market power of digital platforms and proposed updated antitrust enforcement and regulation to address them as well as authored a number of other publications related to competition enforcement. She has spoken widely on this topic across the U.S. and Europe.

From 2011 to 2012, Scott Morton served as the deputy assistant attorney general for economics at the Antitrust Division of the U.S. Department of Justice, where she helped enforce the nation’s antitrust laws.