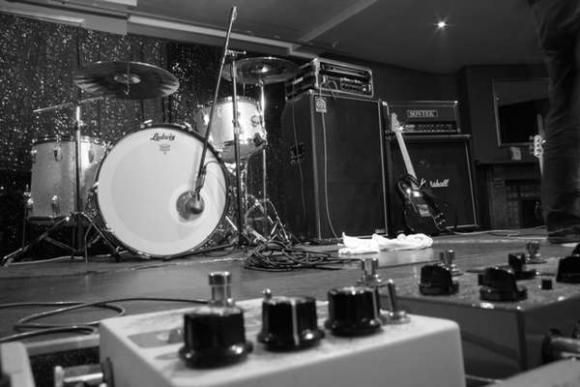 The night before Thanksgiving break I got together for some late-night whiskey drinking with Dave Gorin and Kirk Henderson. When I talk about Yale as an interdisciplinary hive, this is what I’m talking about. Dave is a wildly talented poet who’s striving for a shred of job security by doing an English Ph.D. at Yale. Kirk is an architect who spent the last three years designing green communities in Turkey; when we were both undergrads, I helped him dismantle a sauna scrapped by the Yale gym and re-assemble it as a free-standing modernist structure at 229 Dwight Street. When Dave, Kirk, and I get together, the chief impediment to conversation is sunrise.

Dave plays guitar and sings songs that only a poet could write. I play drums poorly. I told Dave, “We should start a band at Yale. Nothing serious.” He agreed.

I went home over Thanksgiving. My parents, exemplifying the selflessness of parents, have been storing my old drum set in their garage since 2003. I pushed past the cobwebs and pulled out the essentials: high-hat, snare drum, bass drum, ride cymbal.

I needed a suitable bag. I drove to the Army Navy surplus store in Mountain View. The smell of canvas and mildew brought me back to seventh grade; I used to ride my bike here to peruse the knives and ropes and ammo cans. They have an entire aisle of duffle bags: flight bags, waterproof bags, used Vietnam-issue bags with GIs’ names on them. I bought a big black duffle.

I fit everything but the bass drum into the bag. So I showed up at SFO with a cavernous bag full of drum set and a big red bass drum. The United agent raised her eyebrows. I pleaded for help and explained I was Star Alliance Gold. She asked permission from her supervisor, and got it. Hallelujah.

Now I’m back on the East Coast and I have my drum set. Now Dave and I face two challenges: making beautiful music and coming up with a sweet band name.