While many students were preparing for midterms or finalizing travel plans for spring break, an interdisciplinary team of 10 Yale students was busy applying lessons learned at Yale to real world problems.

On March 8, Yale students presented plans to increase energy efficiency and reduce energy waste in American buildings as part of the Department of Energy’s annual Better Buildings Competition. Yale competed against teams from 14 of the nation’s top universities including the Massachusetts Institute of Technology, University of Michigan, and Carnegie Mellon University. Yale won Best Proposal in two categories, the only school to take the top prize in more than one category.

Energy Secretary Dr. Steven Chu and Assistant Secretary Dr. David Danielson launched the Better Buildings Case Competition in 2011. The competition was designed to engage the collegiate community to help meet President Obama’s challenge of reducing energy in commercial buildings 20 percent by 2020. Teams develop plans that are both structurally possible as well as financially and politically realistic so that the best can be implemented as models for success across the nation.

This year, teams where tasked with providing solutions to the Energy Efficient Buildings Hub, the U.S. General Services Administration, the City of Fort Worth, and the “Everything Store,” representative of several retail stores including Staples and Target. Yale won in the former two categories.

Yale Captain Kristen Demeter (FES ’13) believes that her team’s range of skill sets gave Yale an edge over its competition. “Our interdisciplinary team comprised of FES and SOM students with a variety of backgrounds – covering engineering, policy, finance, etc - really set us apart. This enabled us to tackle important energy efficiency barriers in a comprehensive way.” 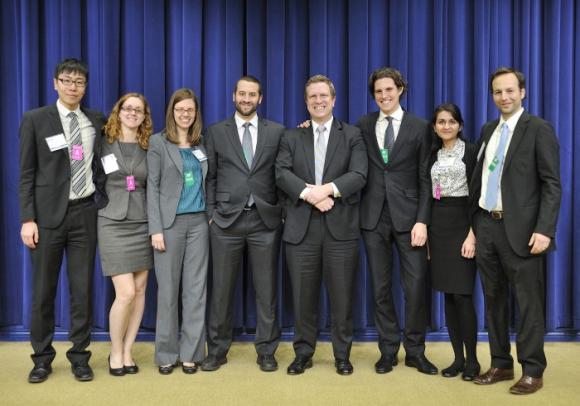