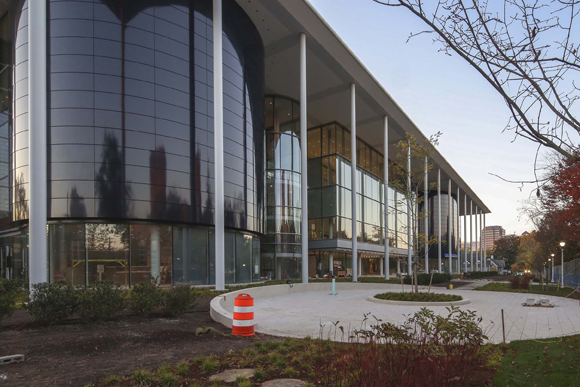 Some Yale SOM staff have already been spending considerable amounts of time in Evans Hall, installing technological systems and preparing for the move. The transition will begin in earnest in December, when administrative departments and faculty members begin moving into their new offices.

The official opening of Evans Hall will take place on Thursday, January 9, part of a three-day conference titled Business + Society: Leadership in an Increasingly Complex World. The conference, which will be streamed live, will begin with a ceremony recognizing those who helped make Evans Hall possible.

Students will return from winter break and begin classes in Evans Hall’s 16 state-of-the-art classrooms on Monday, January 13. Between classes, they’ll be exploring other new facilities, including a café, breakout rooms, the Ligon-Lamsam Student Commons, the Ross Library, and the Zhang Auditorium.

Students, staff, and faculty will gather on the evening of Thursday, January 16, to toast the new building, in a special edition of Yale SOM’s traditional Closing Bell, renamed Opening Bell for the occasion. Later in January, Yale SOM will host open houses for Evans Hall’s neighbors in the Lincoln-Bradley neighborhood and for the Yale community at large.