Luckily, these final pot luck dinners managed to stay on the schedule; most people enjoyed them because it was a good way to relax and socialize in a casual setting just prior to finals. The pot lucks were also really successful because SOM can cook! While there are always a lot of people who profess to love eating food, there is generally less people who can actually cook good food as well. At SOM, I found that many of my classmates were able to produce great food at very high levels, even when scaled up for large quantities. 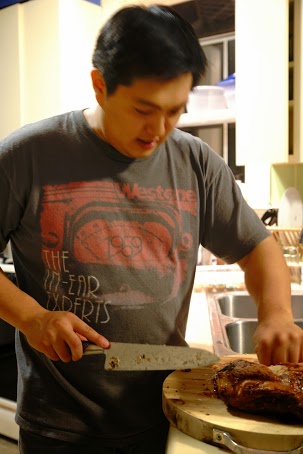 It was at the pot luck just before winter break that I first heard of Top Chef. I had invited Christina Maineiro (SOM '15) to my party and she was really excited about putting together such an event. Thus, it was only natural for me to try and pick the people I would want to work with on this competition from the people who had been attending my pot luck gatherings. My team later joked with me that my Pot Luck parties were like a tryout to determine who would get on my team, and I guess it was true in some sense. However, what I tried to find was not those people who could cook the best: I selected the people that were the most passionate about food and still knew something about cooking. I considered this the best tactic because I wanted to work with people that would challenge themselves to achieve something greater than anything they had done in the past.

This recruiting strategy also became the strategy for our dish, I wanted to make something that even the sophisticated palates of SOM had not likely seen before, but still tasted delicious. When I presented my idea of an edible soil to the team, they responded better than I could have hoped; they embraced the challenge and immediately added their ideas to improve upon the final product. As a result, everyone worked very well together and cohesively. We were even able to be flexible with the dish and reign in some of our expectations when it became clear we didn't have enough time to fully execute. 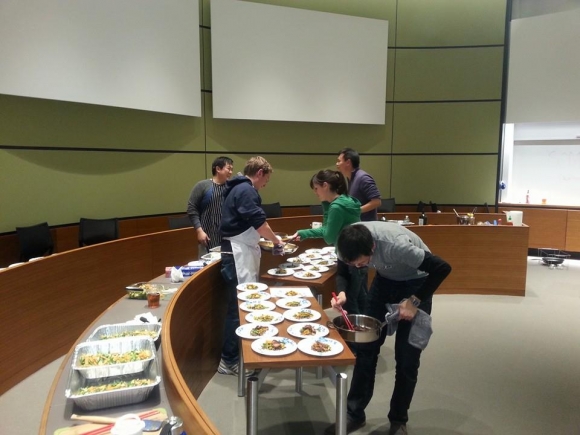 The actual event was quite a blur; there were 7 teams of 5 that had to feed 150 ravenous SOMers in groups of 20. I later heard that all the chefs were so dedicated that they didn't eat anything - whether it was dinner or trying other teams' dishes. We managed to try the dishes from 4 other teams and I was extremely impressed with the overall quality; all of the other dishes were really well executed and had great flavors. These flavors were even from all parts of the world based on the many different countries SOM students come from.  I really commend all the other chefs as we all had to work a very long day to prepare. All teams found out the 4 secret ingredients: chocolate, sriracha, avocado, and coconut at 9am, and cooked for their lives until 7pm when it was time to serve. 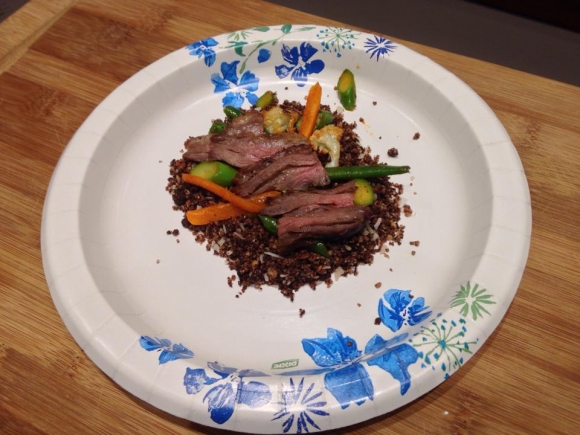 Overall, the event was a lot of fun and it was extremely successful, and it epitomized how SOM students often sacrifice for the greater good. I've often said that food is a form of artistic expression and also serves as a great medium for bringing people together. It was a privilege and an honor to cook with 34 other master artists who put their souls on the plate and brought all of SOM together. I hope all those who attended enjoyed the event.