Sunday’s Barbeque and Darty (a shortening of Day Party) provided an opportunity for us all to come together at the beginning of the year. 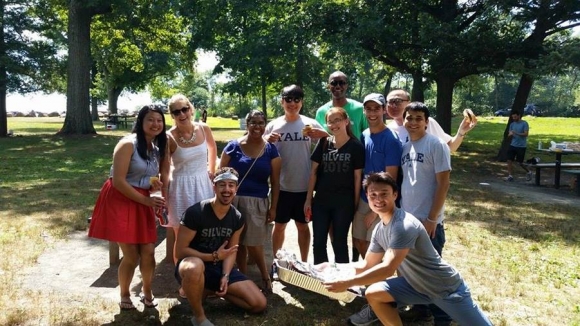 Several hundred of us made the trip to the top of East Rock Park (by bike, foot, or car) where a team of second year students manned grills to greet us with hamburgers, hot dogs, and vegetable burgers. The number of people stuck out in the mind of Katie Muir ’15. “It is good to see so many people out and to see the integration of the classes beginning.” In a later conversation about the number of partners, children, and dogs that joined students at the top of East Rock, first year Li Deng Kehl added that she, “loved seeing the dogs. Where there are dogs, there is community.” 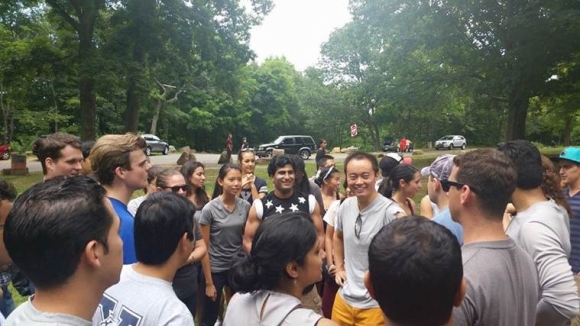 To me it did feel like a community. I caught up with fellow second years, who I hadn’t seen all summer asking that perennial back to school favorite, “How was your summer?” Meeting first year students, MAM students, and partners as they start their time at SOM provided a nice balance. I found myself getting drawn in to conversation with people I had just met. I wasn’t the only one. Daniel Dzamesi ’16 with a fair amount of silver cohort pride said, “I was so busy talking I missed the tug of war and we still won.” Blue won the other semi-final round. As part of the class of 2015, I was happy to hear that the two winning cohorts wanted to wait until more of the 2015ers were around to cheer before they held the final round. 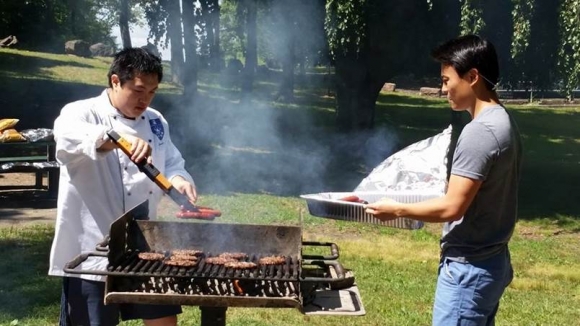 The festivities continued as people came down the hill to for the Darty at the pig-roast house. Christina Mainero ’15 talked about the planning for the day with Susan Zhou ’15, “We felt like this would be another great opportunity to have a place where first and second years could meet up and just hang out on the lawn.  In our minds, it was kind of the perfect Sunday—a BBQ, the beginning of the Cohort Cup, and a Sunday afternoon out in East Rock Park and on our lawn.” I want to thank both Christina and Susan along with Josh Shin ’16 and James Lin ’15 for opening up their lawn to all of us and to thank all of the others involved in the planning and preparation for all of the day’s activities. This is part of a great start to the year.