As recently as even three years ago, if you had asked me whether I was considering business school, I would have (at best) shuddered or (at worst) simply laughed in your face. The idea—at least, as conceived in my mind—of politicking my way up the corporate ladder while trussed up in a bland-colored suit with a serious air of inflated self-importance appealed to me about as much as, say, eating cardboard for the rest of my life.

In retrospect, I am not sure exactly where this unfavorable impression originated. If I had to venture a guess, I would attribute it to some combination of “The Office” and a few too many war stories from friends who had earned their first six-figure salaries—and their first set of wrinkles, at age 25—from investment banking and management consulting. Business—and, by association, business school—just seemed so… serious.

And for me, there was a high bar for “serious.”

My Campaign Against "Serious"
As explanation for this high bar, in addition to losing a parent at a young age, I had spent much of my college career immersed in the study of and advocacy against human rights violations. These violations ranged from genocide in Sudan and female genital mutilation in Saudi Arabia to obstetric fistulas in Somaliland. Over time, both experiences, among others, redefined the way I perceived the world. In particular, they taught me, for better or worse (though I’d like to think for the better), to not to take many things—especially most of my day-to-day first world, Ivy League problems—too seriously.

Accordingly, my classmates here not infrequently comment on my quickness to laugh or, most recently, the wiffle ball and bat that I brought to class in order to inspire a spontaneous end-of-day game. (In case you are wondering, this strategy worked, though there is some residual debate about which team emerged victorious.)

From Grave to Gauche
This same mentality is, perhaps, what drove my rather last minute decision last weekend to turn our annual winter formal into, well, a winter informal. To celebrate what would be the first formal in years for many of us, I invited a few classmates over for photos, prom-style, with a twist: They had to sport a fun, gauchely informal prop to clash with our formal clothes.

As some context for this invitation, Fall 2 had found our first-year class hitting the ground running: In addition to the inevitable challenges of intense group work, club activities and recruiting had ramped up, with some classmates taking on Skype interviews at the likes of 1:30 a.m. to interface with recruiters in Asia. The incoming winter weather had ushered in the usual seasonal colds, and juggling all of these commitments—while fighting a temperature, no less—gave many of us a good deal about which to be serious.

In light of all we had going on, then, I was surprised when my guests did come bearing props—ranging from wigs and neon headbands to purple feathers and childhood orthodontia. Moreover, not only did they agree to be photographed, but they also consented for this photographic evidence to be published for the common good (so long as individual names remain unmentioned): 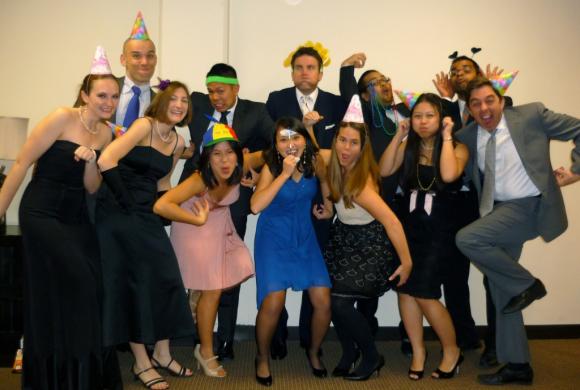 Needless to say, my opinion of them has increased significantly since.