I first became interested in financial markets during the Asian financial crisis in 1997. I visited family in South Korea around that time and remember being struck by how deeply the crisis affected people’s lives. Many of my relatives lost their jobs and substantial portions of their savings. I wanted to understand what had happened and how I could help prevent and contain this type of crisis in the future.

To build the knowledge and the skills I needed toward that end, I studied economics and accounting in college and took a job in New York as an auditor for financial services firms. Yale SOM made sense for me for a variety of reasons—its strength in finance recruiting, its network, and its broad integrated curriculum. As someone who has aspirations at the intersection of finance and government, the mission statement, “Educating leaders for business and society,” resonated deeply with me. I’ve felt at home here and have found a community of like-minded people. I spent my summer in investment banking at Citi—where I’ll be headed back next year.

Going into my second year, I’m blown away with the relationships and expertise that reside within the faculty at SOM. It’s these relationships that create opportunities like “Global Financial Crisis,” a class co-taught by Professor Andrew Metrick and. former Treasury Secretary Tim Geithner.

While Metrick leads the course, it’s truly a group effort. Geithner is here for three lectures, with prominent economists such as Robert Shiller making guest appearances. In Metrick and Shiller’s lectures, we learned the history leading up to the crisis, the financial instruments at play, and the economic arguments on why the financial crisis occurred. As a result we were prepared to evaluate Geithner’s remarks for ourselves when he arrived on campus for his first lecture earlier this month. 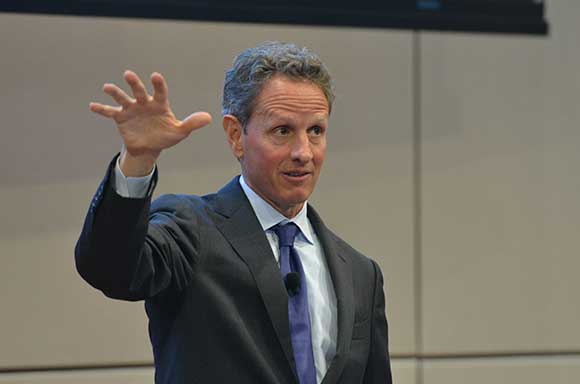 Geithner claims to be a poor public speaker but he carried significant gravitas in his comments to us. Speaking in careful, serious tones, he argued that the funding structure of the financial system was its key weakness. He used wooden blocks as a metaphor, setting up one block upright and laying one flat on the table. Geithner then shook the table—noting that the block standing upright toppled over immediately whereas the one that lay flat barely moved. His point was that financial institutions that have similar assets (the same blocks) but different capital structures (the way they were positioned) would have radically different outcomes when put under duress.

Geithner made the case that new forms of maturity transformation between short-term funding and long-term assets—and the government’s inability to constrain growth in the shadow banking market—was the most compelling reason for the crisis. It was this funding structure that left financial institutions vulnerable to a modern day version of a run on the bank.

Understanding the government’s concerns will be critical in navigating the evolving regulatory culture for businesses. I hope to use these lessons in my career by helping clients balance capital market opportunities with financial and regulatory risk.

Geithner told a few fun stories too. He still likes The Daily Show, despite the beatings he received from it over the past few years. He also recalled worrying that his youthful looks would hinder him at work. The night before he started his job as president of the New York Fed, he stopped at a convenience store to pick up some milk, yogurt, beer, and a few other essentials for his one-bedroom apartment on the Upper East Side—and got carded.

Secretary Geithner isn’t just doing a quick speech and hitting the road. In addition to the two remaining lectures, he’s meeting with the entire class in sessions of 20-30 students. Those who have already had their sessions walked away impressed with his candor.

I’m signed up for my small session in December and I’m looking forward to my chance to pick his brain.