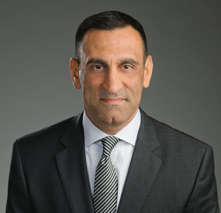 Darwish is also a managing partner at DS Advisory Group, a boutique investment bank that works on mergers and acquisitions, financial restructuring, and equity capital raising for the new media and technology industries. He spoke to Yale SOM students about his take on the industry, and about the process of launching a new technology venture, as a guest of the Technology Club on February 12.

GlassesOff is available for iPhones and Android phones. It features a series of visual games that over time improve function in the brain’s imaging center, improving near vision and doing away with the need for reading glasses, according to Darwish, who’s already used the app.

“I was one of the first to get rid of my reading glasses,” he said. “The market opportunity is huge. Age-related changes in reading affect really everyone in the world.” The company launched its product in December 2013 on Apple’s App Store, and it has since become a top download in the medical category, Darwish said.

GlassesOff’s advertising will focus on its medical credentials: developed by neuroscientists, tested and proven. Darwish said that he’s foregone early media opportunities to hype GlassesOff—including requests by popular TV programs and hosts—because he first wants to get the company’s marketing tools in place. They include: