Less than one year after my start at Citi, shares of the company traded under one dollar on the New York Stock Exchange, barely clinging to life. Once the world’s largest bank with a market capitalization of $275 billion, investors had revalued the company to under $10 billion. It was a stunning decline, but the damage was not exclusive to Citi. Throughout 2008 and 2009, I watched as storied banks crumbled under the weight of their riskiest assets. I read alarming headlines from The Wall Street Journal—“Worst Crisis Since ’30s,” “Turmoil Worsens,” and more—seemingly five days a week. Things just kept getting worse.

Over the following months and years, stories of hardship and uncertainty played out in countries, companies, and households across the world. As I witnessed this, I came to more deeply appreciate the important role that business plays in society. After four years on Wall Street, that appreciation led me to apply to SOM, a school whose mission embodied the type of leader I truly wanted to be—one for business and society.

One way I hoped to become that type of leader was by studying under the stewardship of business and government leaders who embodied that ethos. That is why, when I learned that former Treasury Secretary Timothy Geithner would be teaching a course at SOM, I jumped at the opportunity to join the discussion. 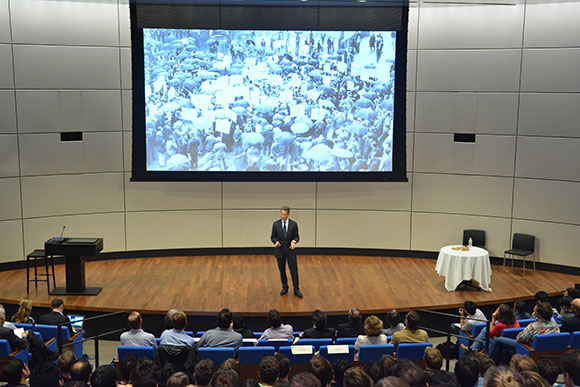 Our conversations with Geithner over the course of the semester were wide-ranging. We spoke about the causes of the crisis, the various policy responses, the challenges of leading a team through a crisis, and the personal resiliency that helps bring one through such difficult times.

Each conversation was valuable in its own right, but one in particular sticks out in my mind. It took place during one of the meetings Geithner held with small groups of students. We were debating what could be done in order to prevent a future financial crisis. Geithner asserted that, even after all we know and have been through, we will not be able to prevent future crises. They will come, and they will come when we least expect them and are least prepared for them. As he explained, markets will always find ways to circumvent regulations—that is just how complex and multi-jurisdictional systems operate. The true measure of a regularly system, then, is not if it prevents a crisis; rather, it is how well such a system responds to future crises—even if we do not yet know where, when, or how those crises will manifest themselves.

Building that flexibility into the US financial regulatory system will not be an easy task. Based on what I learned over the course of this semester, I believe that Geithner and others have laid the groundwork and made impressive strides. But there is, of course, still more work to be done.

As I sat in the Zhang Auditorium during Geithner’s final lecture on Dec. 3, I came to appreciate that what made the course unique and valuable was not just who was on stage but also who was in the audience. Because chances are, one of my classmates—from Yale SOM, Yale Law School, or Yale College—will be the ones to follow in the footsteps of Geithner and work to make the financial system safer and sounder. Knowing that this important work will be carried forward by my Yale classmates reminds me that what makes SOM so special is the people—the students, faculty, and alumni—and their commitment to being leaders for business and society. This course is but one example of how SOM helps its students live up to that mission.