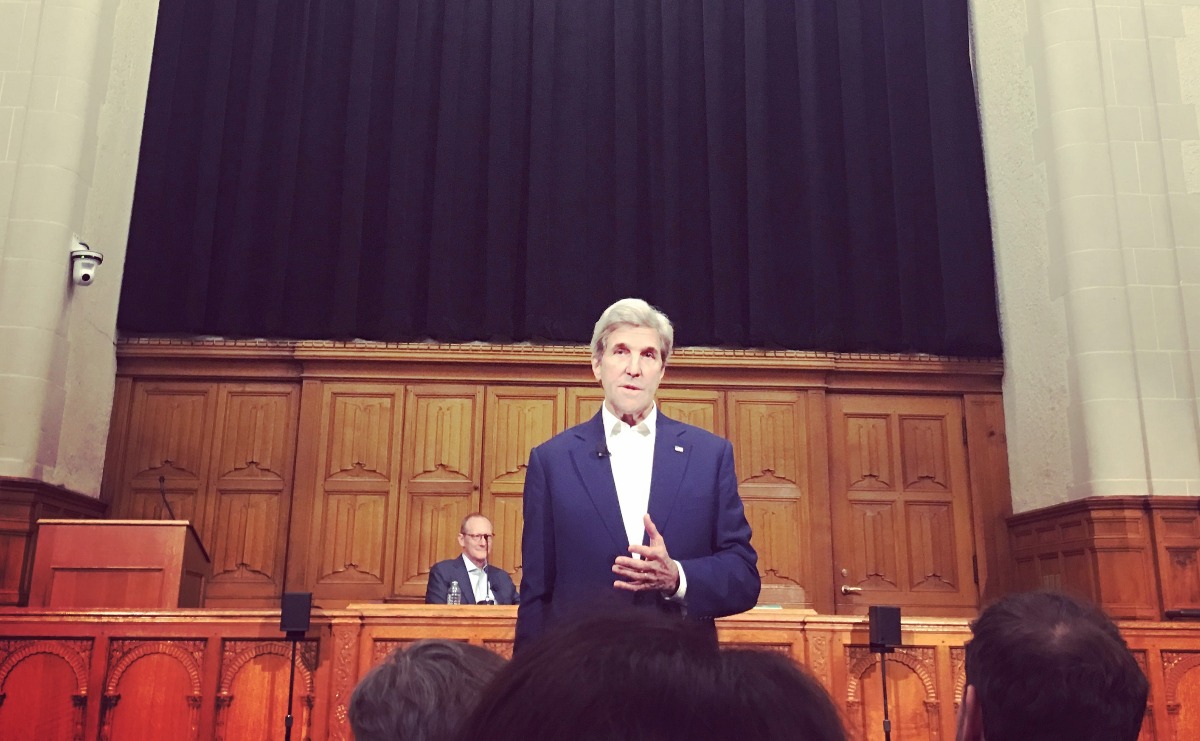 John Kerry had no shortage of political drama in his youth. “In my freshman year, we almost had a nuclear war. Then, in my sophomore year, there was the assassination of JFK. In my junior year, we started to have different voting rights, and in my senior year, I had to make a choice for myself: Do I serve my country? Go to grad school? Or go somewhere else? I thought I was living in a fast-paced age back then, but now, we are experiencing industrial-sized change at a digital pace.”

On April 27, the former U.S. Secretary of State spoke at the inaugural “Kerry Conversation,” sponsored by the Jackson Institute for Global Affairs. Kerry will join Yale in the fall as a Distinguished Fellow in Global Affairs. In addition to teaching, he will oversee the Kerry Initiative, an interdisciplinary program that will address global challenges through teaching, research, and international dialogue.

I joined a packed auditorium of students and faculty from across Yale, cheering Kerry as he stepped down from the stage to bring himself closer to the audience. It was a moving experience to be a part of a candid dialogue addressing topics such as the impact of globalization, geopolitics in the Trump era, and working together for a better world.

In addition to its many benefits, globalization has widened the economic, social, and political gaps among us, creating friction that’s further amplified by the technology that touches almost every aspect of our lives. I quaked with fear as France went to the polls in its national election, and was relieved when voters chose Emmanuel Macron, who embraces globalization and European integration, over Marine Le Pen, who channels the anger and forces of discontent that triggered Brexit and crowned Donald Trump.

Kerry acknowledged these political divides. In response to a student’s comment about career paths—that perhaps the current U.S. government “isn’t the government we want to work for”—Kerry urged students to stay engaged. “If you don’t speak out, who will? What kind of world do you want?” He emphasized that everyone needs to pitch in to make the next generation a better world.

The first step to working together, he said, is to do the work to understand people’s motivations, then base our decisions on the data we collect. But, he said, while “everyone is entitled to their own opinion,” they are not entitled to their own facts: “The notion of alternative facts is a strange noise, and we need to restore facts to where they belong.” He cited the Trump administration's oscillating stance on the issue of climate change; through education and dialogue, he said, we can “bring them to their senses, not to their knees.”

Facts, engagement, and the open exchange of ideas define life at SOM. What I have loved most about my SOM experience is its atmosphere of action—“let’s make things happen”—within a diverse group of peers. We talk about learning from others and adopting different perspectives, and that is what my classmates from around the world do every day. I believe that every SOMer appreciates this privilege and treasures the friendships we have formed here. Echoing Kerry’s call to action, I hope we will continue to participate in this necessary dialogue, and work together to be the change we want to see in the world.