Oh yeah—come January, Jed will be the new President of the Lincoln Center for the Performing Arts!  An incredibly humble man from our little program here at SOM will soon lead the most prestigious arts organization in the country, perhaps in the world!  When the news about his appointment came out in June, I was floored and felt an immense amount of pride for SOM—truly a demonstration of a school that educates leaders for business and society.

But, my pseudo-nationalism for SOM aside, Jed had some really insightful things to say about his journey from a fresh-out-of-undergrad kid who applied to SOM because of its close association and integration with the School of Drama (we now average 2-4 MFA/MBA joint degree students in the Theater Management track per year), to interviewing with one of the most high-powered and accomplished boards of directors in Manhattan.  What really struck me was his embrace of failure—both as a definitive part of his professional history as well as an inevitable part of his future.  He relayed a particularly inspiring story about a conversation he’d had with one of his new board members in which he’d asked her to help him avoid making mistakes.  Her reply to him was "Let’s make new mistakes."  It was beautiful how he used this story to illustrate the fact that mistakes are inevitable, but that it is how we learn from them that defines us as leaders. 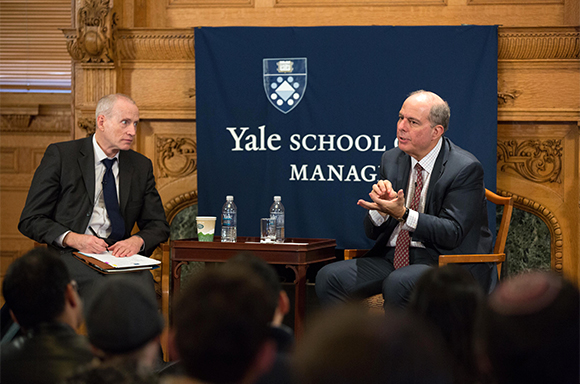 So why is he my hero?  (Aside from the fact that he managed to be funny, profound, engaging, and comfortable in front of 75 grad students with very high expectations.)  Well, I was a theater major in undergrad (at NYU’s Tisch School of the Arts and the Atlantic Theater Company Acting School), and halfway through I realized that I much preferred being in charge to being onstage.  Coming out of school, I formed my own theater company, Thirsty Turtle Productions, which I then ran for 5 years.  It was the most fun I’d ever had, and remains one of my proudest accomplishments.  The thing is that even after a career in the nonprofit space, after becoming a consultant, after coming to business school, a part of me continues to yearn to return to the arts. 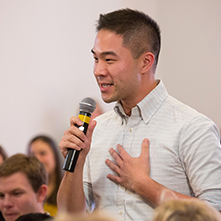 At the end of the discussion we were given the opportunity to ask questions, and I did not hesitate as I usually would in this situation.  I raised my hand straightaway and asked Jed about his views on the intersection of art and commerce and what role Lincoln Center would play in the future of the industry.  To hear a man who has so successfully bridged the gap between MBAs and creative artists explain his views on how the sector will need to adapt over the coming decades was a once-in-a-lifetime opportunity, and I wish that I had been able to ask him a dozen more questions.  Several of my classmates were able to have lunch with him following the talk, but I was unable to attend as I was a presenter in my next class—Professor Connie Bagley’s Legal Aspects of Entrepreneurship.  (The topic was family businesses, and our guest speaker was Karen Pritzker, a member of the legendary Pritzker clan, and a majority shareholder in Colson Associations, which, lo and behold, was our case study for the day, so my missed opportunity turned out to be just as awesome in the end.)  All the same, I hope I get a chance to meet him again in the future and to thank him for setting the stage for dozens of future leaders in the arts and culture sector to emerge from the Yale School of Management.  And to tell him that he became my hero over the course of a lunch.