All right, world, in homage to the legacy of the Harlem Shake and the Cupid Shuffle, I am hereby coining a new dance—the Yale SOM Hustle.

Usually performed en masse by New Haven 20- and 30-something’s, the Yale SOM Hustle, like its predecessors, is a highly physical endeavor, featuring plenty of arm-flailing, (hand)-shaking and percussive rhythms. Unlike its esteemed forerunners, however, it also boasts a cerebral intensity that will stretch your prefrontal cortex and limbic system to new limits. In near simultaneity, you will find yourself juggling the management of a cranberry-processing plant, the art of cross-continental travel and the deep introspection triggered by profound life questions such as, “If you could be a superhero, which one would you be, and what would you do with your superpowers?”

Oh, and before I forget, here at Yale SOM, we commonly refer to the Hustle by its official name, “Spring 1”—usually, of your first year.

Apologies for my radio (web?) silence over the past month as I strived mightily to master the Yale SOM Hustle. Between the recruiting, the coursework and the preparation for our upcoming International Experience trip, I found that this full-body, full-mind immersion did not leave me many moments of solitude—well, at least, conscious solitude that did not involve REM waves.

With our last, 2000-word final now behind me, however, I am pleased to report that I have mastered—or survived, depending on how you look at it—the Hustle. With 18 interviews, several thousand airline miles and four more credits under my belt, I have emerged with trophies in hand—a summer internship with Google’s new Wildfire team, a new network of friends in the Bay Area and, fingers crossed, some humbling but sufficiently proficient grades on my academic record.

In a few days, I will be joining the other Yale SOM Hustlers (read: my fellow first-year’s) on our globe-trotting adventures for International Experience. Keep an eye out for updates from the likes of Nicaragua, Indonesia and—in my case—South Africa, where a friend and I will be embarking on our first safari in Kruger National Park before joining our classmates in visits to key socioeconomic players in the country, including the social enterprise the Awethu Project as well as Eskom, the largest producer of electricity in Africa.

Until then, lest you come to the erroneous conclusion that the Yale SOM Hustle was devoid of fun, here is evidence from my cohort’s latest shenanigan, held in loving commemoration of the birthday of our classmate, Neil, who—like President Obama—saves his energy and willpower for the important decisions in life by streamlining his wardrobe choices.

(Bonus points, of course, if you can figure out which one he is.) 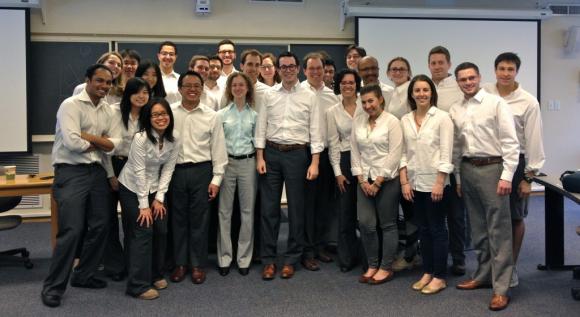