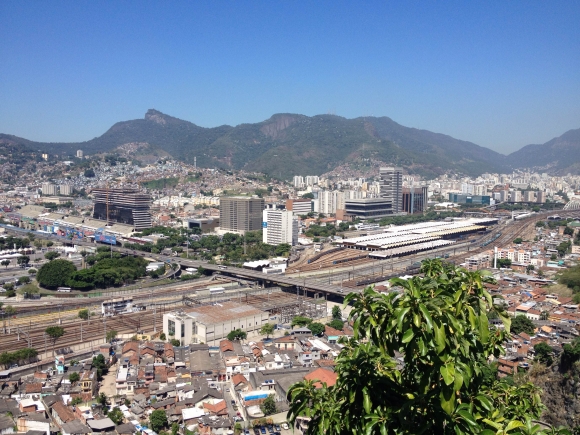 Our ten days and twenty-five meetings in Rio and São Paulo suggest this condition lives on.  So much of what business presupposes in the US is crucially absent in Brazil—in law, in infrastructure, in capital markets and more.  And yet this very condition demands greater experimentation, bigger ideas. When it comes to innovation, contemporary Brazil makes a necessity out of a virtue.

In line with this theme, I’ll gloss some of the key challenges our meetings brought to light.  For the sake of brevity I’ll confine myself to the four that seemed to come up the most often.

Brazil’s transportation infrastructure has become a significant bottleneck to development.  In our meeting at the US Consulate, Economics Officer Matt Stokes named this as one of Brazil’s two biggest challenges.  Former Energy Secretary and Eletrobras CEO Jose Luiz Alqueres emphasized it as well, citing a report from the World Economic Forum that ranked Brazil’s infrastructure 70th out of 148 countries surveyed.  Brazil’s seaports take weeks to move cargo that Rotterdam moves in days, and its airports take days to move what China does in hours.  Former Agriculture Secretary Roberto Rodrigues discussed the costs added to Brazilian commodity exports by poor quality roads and a limited rail network.

The market has permitted some degree of accommodation.  There are actually companies whose sole purpose is to collect the soybeans that bounce out of their containers on the country’s bumpy roads.   Brasilata, a can manufacturer, has pioneered new designs with tighter fitting lids and greater resistance to heat and pressure.

But why isn’t there more private investment in the infrastructure itself?  Stokes stressed the government’s tight controls on the concessions it grants to private developers, especially the ceiling it sets for the developer’s rate of return.  A recent highway project received no bids at all.  At Andrade Gutierrez, a major construction firm, we also heard that once a developer accepts a project, political pressure from the government makes it very hard to back out if it proves unprofitable or infeasible.

The second challenge Stokes highlighted during our consulate meeting is education.  Our meeting with Dennis Mizne, president of Fundação Lemann, explored this problem in depth.  The universalization of education in Brazil only began in the 90s and is still very much underway.  To increase the number of students existing facilities could serve, the school day was cut in half to just four hours.  High schools have a 52% dropout rate, double that here in the US, and only 10% of graduating seniors meet minimum standards for math proficiency.  As for the causes, in addition to the shortened school day, Mizne emphasized teacher absenteeism and apathy as well as the lack of standardization across curricula (teachers are in charge of what and how they teach).  To solve this problem Mizne wants Brazil to become the Silicon Valley of education technology and software.  His nonprofit currently has a pilot program distributing Khan Academy lectures translated into Portuguese.  They’ve also created a website that aggregates government data on the performance of schools nationwide in a much more accessible format.

The high dropout rate came up again in our visit to Globo, Brazil’s largest media conglomerate.  During our tour of the studio Juan Crisafelli told us that Globo explicitly chooses social messages for its programming to promote, key among them staying in school or returning to school if one has dropped out.

Energy and the Environment

Brazil depends on hydropower for nearly 3/4ths of its electricity, but the increased frequency and severity of droughts has made the system less reliable.  In several of our meetings we heard about the push for diversification in Brazil’s energy portfolio, but there’s currently no obvious alternative to pick up the slack.  Wind has real potential, but Stokes for one is skeptical about how quickly it could be developed.  The grid today relies on natural gas power stations as a back-up for hydropower, but much of that gas has to be imported from Bolivia, as Rodrigo Más explained in our meeting at Bain.

Natural gas contained in the newly discovered pre-salt oil fields may be the most realistic short term option.  As we learned in our meeting at Petrobras, government regulations require that oil and natural gas extraction for these reserves must be developed in tandem (flaring the gas is illegal).  Given the depth of the discovery, however, and its distance from shore, this will take time.  Roberto Rodrigues sees a bigger role for bagasse-fired power plants as part of the solution, though it’s unclear how much this option can scale.  Though Alqueres advocates diversification, he also contends that large hydropower plants will have to remain at the center of Brazil’s energy mix.  That said, the political cost of such projects has gone up in recent years due to public concern over their environmental and social impact (methane emissions from decaying flooded vegetation; displacement of rural populations).

Brazil’s Eletrobras estimates an income elasticity of demand for electricity in Brazil greater than one.  As the country continues to grow, the strain on its existing power system will accelerate.

Sustainability came up in number of our visits as well.  Natura’s green credentials are essential to its brand.  It minimizes its products environmental impact through reduced packaging and less energy-intensive manufacturing processes (e.g. a lotion that can be mass produced at room temperature).  The Globo studio we visited generated its electricity using methane from a local landfill.  The materials from sets, props and costumes are recycled as much as possible as well.

The equity market in Brazil is underdeveloped, at least in part because of a lack of investment from the general public.  At Bovespa, Brazil’s largest stock exchange, Fabio Abe pointed to high interest rates paid by government bonds as the primary cause.  We heard a different, but complementary explanation at Itaú Unibanco, where Director of Investor Relations Gustavo Lopes Rodrigues said the public sees investing in equities as tantamount to gambling.  In any case, Bovespa saw just 10 IPOs in 2013 and only 25 in the three years prior.

Private equity and venture capital are still relatively new, though both have experienced dramatic growth over the last decade.  Piero Minardi, a partner at the PE firm Gávea Investimentos, mentioned two recent reforms that should make private investment easier in Brazil.  A new bankruptcy law has added protections that allow more time to restructure.  Second, the Brazilian Supreme Court has approved private arbitration for the resolution of business disputes—critical, as Minardi explained, given the lack of specialized business courts.

Entrepreneurship faces more significant obstacles.  As Minardi pointed out, entrepreneurs typically face interest rates of 13-14% when borrowing from Brazilian banks.  A private equity and venture capital panel at our hotel addressed another issue, the custo Brasil.  This blanket term covers everything that makes doing business in Brazil more difficult, from government corruption to inflexible labor laws.  Getting around these obstacles is often a matter of knowing the right people.  The arbitrary selection pressure this creates is a problem not just for entrepreneurs but for the competitiveness of the Brazilian economy more broadly to the extent that it makes it harder for the best new ventures to take off.  That said, once a venture reaches the other side, the custo Brasil acts a barrier to entry by potential rivals, and in fact this is the frame the panelists adopted.