From the Assistant Dean for Admissions: A Warm Welcome to the Class of 2018

This past Monday marked the beginning of orientation for the Yale School of Management Class of 2018. The group that arrived on campus is as diverse and accomplished as any we have welcomed to New Haven.

Among them are musicians who are classically trained (on violin, piano, guitar, flute, clarinet, bassoon, trombone, sitar, harmonium, and other instruments), jazz-inspired (saxophone and trumpet), and  recreationally inclined (ukulele). They dance—from ballet to ballroom to salsa to the Lindy hop to popping (but not locking).

They are varsity athletes and captains across a range of sports; decorated athletes include a six-time Lebanese national swimming champion, a Gymnastics level 8 Maryland champion, and the holder of the Guinness World Record for captaining a team in the longest recorded rugby match. No less enthusiastic are the devotees of kickball, dodgeball, and roller derby. 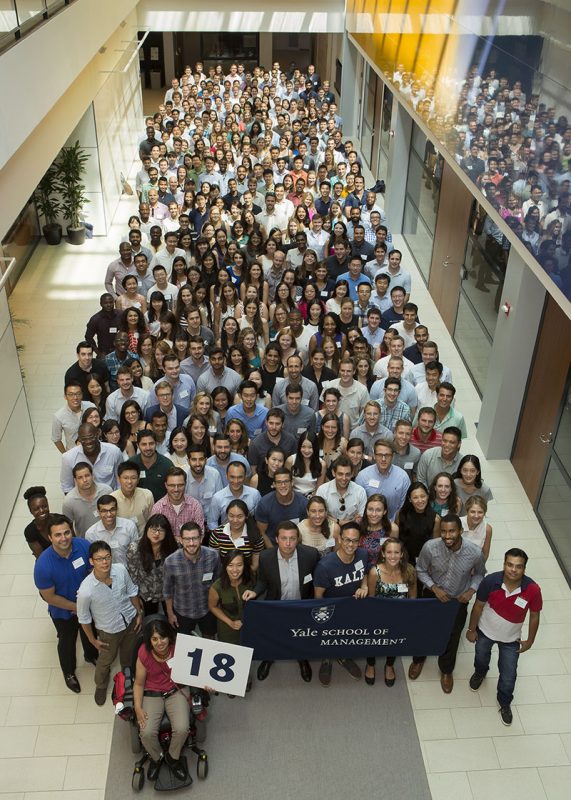 They speak innumerable languages, from Spanish to Russian to Arabic to Mandarin to Hindi to Vietnamese to Twi to Luxembourgish and beyond. One student was an Indian National Chess Championships silver medalist, another a Chinese Physics Olympiad gold medalist. One is an ordained Zoroastrian priest. Another was a finalist at Amateur Night at the Apollo. They are professional ski and sailing instructors, private pilots, Mensa members, black belts, Eagle Scouts, marathoners, triathletes, tough mudders, certified mixologists, patent holders, SCUBA divers, and members of the MUPPIES (Muslim Urban Professionals).

By the numbers, 46% of the Class of 2018 hold passports from a country other than the United States, with 48 different countries represented overall. Women make up 43% of the class and U.S. students of color 28%; 13% are underrepresented ethnicities. The average GMAT for the class is 725, and the average GPA is roughly 3.6 on a 4-point U.S. scale. Students come from a range of academic backgrounds, from engineering to the arts, including one who double-majored in mechanical engineering and visual arts (another majored in computer science and theater arts). They’ve received various academic awards and honors, from magna and summa cum laude to Phi Beta Kappa to Fulbright Fellowships and Gates Millennium Scholarships; two were Rhodes Scholarship finalists.

Their professional credentials are equally diverse and impressive, covering all sectors and a range of industries, including large financial firms such as Bank of America, Morgan Stanley, and Goldman Sachs; major consulting firms like McKinsey, Bain, Booz Allen Hamilton, and Deloitte (the most common pre-MBA employer); and a host of other employers such as Procter & Gamble, Schlumberger, the Clinton Health Access Initiative, Unilever, IDEO.org, Cummins, Google, the International Monetary Fund, the White House, and many others. The class includes Army Rangers and a Navy SEAL team leader (all Bronze Star recipients), a scouting coordinator for the Baltimore Orioles, a former intern at Chez Panisse, a program manager at Sesame Workshop, and a professional singer-songwriter.

Despite this incredible diversity, what the members of the Yale SOM Class of 2018 all have in common is their aspiration to fulfill the school’s mission of educating leaders for business and society. We are excited for them to begin this journey!