From the Assistant Dean for Admissions: Meet the MBA Class of 2020

Last Monday marked the beginning of orientation for the Yale School of Management Class of 2020. The group that arrived on campus is as diverse and accomplished as any we have welcomed to New Haven. 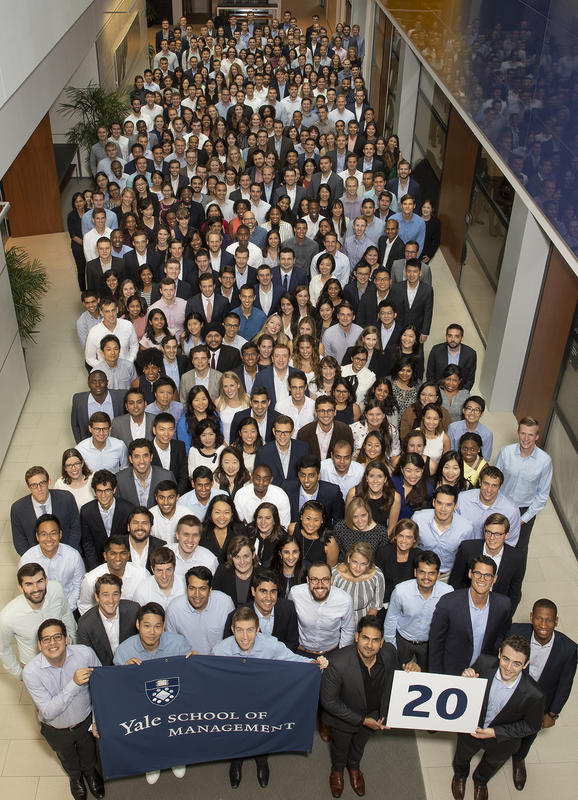 Among them are musicians who play instruments as varied as violin, piano, guitar, flute, clarinet, bassoon, trombone, and drums. They are into bluegrass music and Frank Sinatra. They dance—from ballet to belly to Bollywood. And they sing—a cappella, contemporary, and opera, among genres. They are varsity athletes and captains across a range of sports, as well as marathoners, triathletes, and Tough Mudders. No less enthusiastic are the devotees of Ultimate Frisbee, kickball, dodgeball, and roller derby.

They speak innumerable languages, from Spanish to Russian to Arabic to Mandarin to Hindi to Vietnamese to Twi and beyond. One student won $100,000 from Mark Cuban on Shark Tank and is a Forbes 30 Under 30 recipient for social entrepreneurship. Another successfully navigated a motorcycle over the world’s highest drivable pass. Yet another is the Kit Kat brand manager for the Middle East. They are professional ski and sailing instructors, private pilots, Mensa members, black belts, Eagle Scouts, mixologists, patent holders, SCUBA divers, and certified phlebotomists.

By the numbers, 45% of the Class of 2020 holds passports from a country other than the United States, with 51 different countries represented overall. Women make up 43% of the class, and U.S. students of color 27%; 12% are underrepresented U.S. students of color. The average GMAT for the class is 724, and the average GPA is 3.67 on a 4-point U.S. scale. Students come from a range of academic institutions (188 different schools are represented) and backgrounds, from engineering to the arts, including one who double-majored in mathematics and studio art, and another who majored in finance and philosophy. They’ve received various academic awards and honors, from magna and summa cum laude to Phi Beta Kappa to Fulbright Fellowships and Gates Millennium Scholarships.

Their professional credentials are equally diverse and impressive, covering all sectors and a range of industries, including positions at large financial firms such as Barclays, J.P. Morgan, and Goldman Sachs; major consulting firms like McKinsey, Bain, Booz Allen Hamilton, and Deloitte (the most common pre-MBA employer); and a host of other employers such as General Mills, Unilever, Lincoln Center, Hulu, ideas42, Google, PepsiCo, the Federal Reserve Board of New York, and many others. The class includes members of all branches of the United States military, investment officers from the Malaysian sovereign wealth fund, a public relations strategist for Industrial Light & Magic, and the COO of the largest chain of coffee shops in Nigeria.

Despite this incredible diversity, what the members of the Yale SOM Class of 2020 all have in common is their aspiration to fulfill the school’s mission of educating leaders for business and society. We are excited for them to begin this journey!