Francesco Casetti, a professor in the Film Studies Program at Yale, kicked off the 2014–15 Convening Yale lecture series on September 25 with a discussion of the reactions that innovations in media have provoked throughout history. 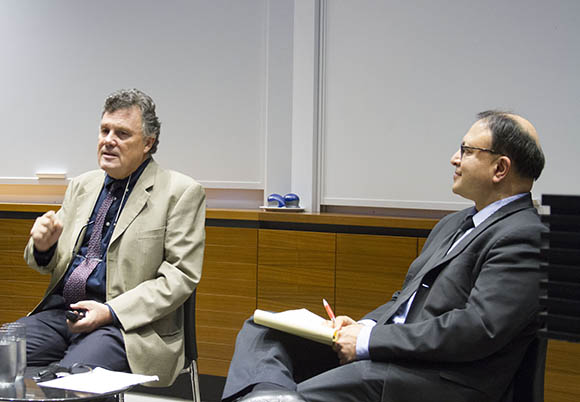 In a talk titled "To Live with Media, Old and New," Casetti explored the ambivalence with which people and societies react to changes in media. Since the invention of the Guttenberg press, through the dawn of the "electronic age," and into today's "digital age," people have responded to media innovation with feelings of both enthusiasm and anxiety, he said.

The power of media to both deliver—and shape—information causes much of the uneasiness, Casetti said. "Media are technical devices for context and relationships," he explained. "This is why precisely they raise so many anxieties. They are not neutral. They mediate."

Casetti called today's digital age the "age of the virtual, where the real and the possible merge." He cautioned that the newest media innovations are not always the best or most insightful, and that they should complement, not necessarily replace, existing devices.

"A skillful use of all tools sometimes is smarter than the next or the most modern device," he said. "We do not live just with the new media. We live with the old."