I’ve had the pleasure of attending the Yale SOM DC Chapter Summer Picnic each of the last four years. Each year that I go, I know what to expect—BBQ, cool drinks, white tables and chairs, and DC’s heat (it’s not a dry heat!). I also expect to see SOMers—established alums, brand new ones (I like these the best), interns, admits (second best), occasional faculty or staff, and families. But, despite these expectations, every year I’m pleasantly surprised (perhaps now an expectation as well) by one thing—a genuine sense of family. Even with new or different alums attending every year, the warmth, friendliness, and eagerness to connect is a consistent characteristic across this group of folks. 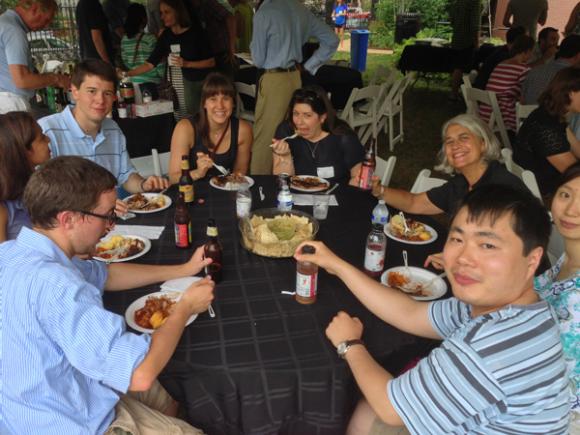 While I was there, one table excitedly discussed first post-graduate positions, as well as hopes and fears, in consulting, government, and non-profits. A good dose of neighborhoods pros/cons and commuting tips were thrown in for good measure. Another discussed an alum’s upcoming month-long trip to Southeast Asia.

It’s a testament to the school and its admissions process. Although there can be a significant heterogeneity among SOM students, there is a common desire and openness for familial connection. In a past role, I used to work with several SOM alumni and a few MBAs from other schools (which the alumni interviewed and selected). One day, a non-MBA co-worker confessed, “I’ve worked with a lot of MBAs and generally it wasn’t very pleasant, they made everyone feel like they were better-than-thou. But, our MBAs are so different—you all are so smart and yet you’re team players and down-to-earth. You guys are some of the best people I’ve ever worked with, we’re like work family.”

In today’s world where many of us don’t live near or spend very much time with our "real" families, it’s refreshing to know that I will always have my SOM family—a nearly 7,000 person community that shares (and sometimes healthily challenges) many of my world views, interests, and desire for connection. We all know you can’t pick your family, but sometimes I think being SOM gets pretty darn close.