Located in the Donaldson Dean's Suite, And Much, Much More! is a contemporary artwork by Amy Pryor ART '01. The work is a  gift made in memory of Alan Buder ’83 by the Blue Sky Club and the members of the Classes of 1983 and 1984. 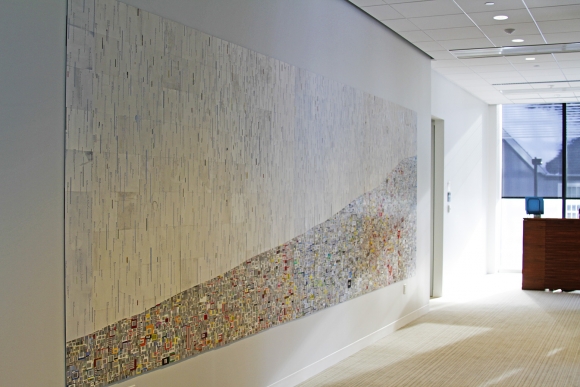 From the Yale Center for British Art:

Based on a bar graph of US GDP from 1980–2010, this work blends cultural history and economic data into a timeline that provides an unfamiliar perspective. Facts and figures dissolve in a hazy, visual-verbal landscape.

Amy Pryor’s topographical collages are akin to archeological excavations or geological cross-sections. The artist typically incorporates a dizzying array of materials meticulously accumulated via myriad sources, from junk mail and ad circulars to bills, forms, and product packaging. Pryor’s densely constructed surfaces function as imaginary maps that reveal aspects of contemporary life while subtly commenting on the ways in which information is processed, codified, and assigned meaning. 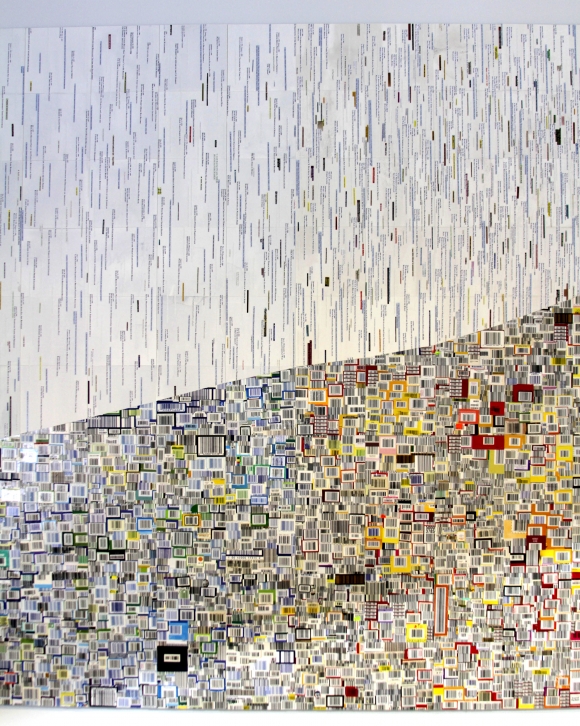 And Much, Much More! was originally commissioned by the Bronx Museum of Art to commemorate the thirtieth anniversary of AIM (Artist-in-the-Marketplace), a professional development program for emerging artists. And Much, Much More! was conceived as an historical timeline. The work weaves financial and consumer product data with key events from the last thirty years to explore the complex intersections between art, culture, politics and economics. It consists of thirty-one collage panels that provide snippets of information for each year from 1980–2010. The panels are arranged in chronological order and in tandem suggest an abstract landscape. Constructed on an 8 inch grid, changes in the Gross Domestic Product are represented by UPC (Universal Product Codes)—four vertical inches of barcode represents one trillion dollars. The panels are color-coded. Sections with primarily red UPC symbols and a warm grey background correspond to years in which the Republican held the White House; panels with primarily blue UPC symbols and a cool grey background represent Democratic administrations.