Innovation. It’s one of those words that seems to be in vogue currently, along with passion and synergy. Firms boast that they proffer innovative solutions to their clients, hospitals submit that they have developed innovation mechanism through which they can provide quality care to their patients, universities declare that they attract students who are the next generation of innovative problem-solvers, and so on.  As a society, we may be using the word innovation carelessly and without thought. Yet, I would assert that opportunities abound for us to innovate, discover, create, and explore unconstrained around campus.

This past Friday, the Center for Engineering, Innovation, and Design (CEID) sponsored an Innovation Boot Camp led by the co-founders of AfterViolet (an innovation consulting firm based in Los Angeles). AfterViolet’s name is derived from the idea that we, as humans, can only see 5% of the spectrum of light, with the idea that innovation allows us to see past that which is visible now into the realm beyond—that 95% of the spectrum that exists to which we are currently blind.
AfterViolet defined innovation as the “freedom to think, create, and develop beyond the expected.”  As one of the founders noted, following that course of action is not easy—it takes courage.  Instead, they emphasized the importance of learning by doing because “Doing stuff in theory is, well, lackluster.”  And, to be frank, I think they hit the nail on the head with that sentiment.

A main focus of the day involved working on a live case to develop our understanding of what they call the innovation spiral, which is one part of the process through which they help their clients grow and evolve.  Before we plunged into learning about the innovation spiral, though, we were introduced to the concept of a wish statement, which is essentially the notion of defining what you (or, rather, what the client) wants.  The wish statement is constructed by utilizing constraints in order to bring dreams and goals to life more efficiently, rather than just having a pie-in-the-sky, everything’s-coming-up-daisies, unfocused vision at the start of the project.  With this wish statement in mind, individuals are asked to think about and develop ideas that are captured on post-it notes that they then present to the group.  Similar concepts are grouped together and clustered on walls, and eventually concepts are voted on.  From that point, the innovation spiral process begins! Concentrated on those concepts that the team decides to pursue, the innovation spiral is an exercise that allows the team of innovators to spiral up and around through multiple iterations (if necessary) that develop concepts and address concerns surrounding these concepts.  And, then we pitched our ideas. 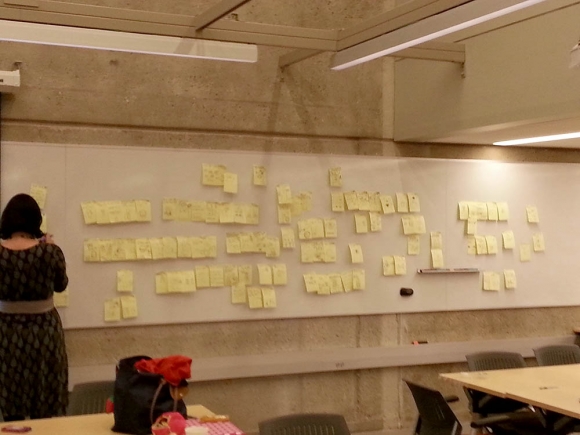 In five hours, we were able to see one way in which it is possible to couple logic and method with creativity and innovation. Those who participated were asked to be fully present and engaged in the process.  It was a brief glimpse into what I imagine an idea incubator would resemble.  And, it was a vivid illustration of the power of engaging with one another to creatively problem-solve, tinker, and fashion new ideas.

The co-founders of AfterViolet concluded the session with what they consider to be signs or characteristics of an innovator. To them, innovators are:

The lessons from AfterViolet’s Innovation Boot Camp have all become part of my innovator’s toolkit.  And, I can justly say that I’m looking forward to adding a whole lot more to that toolkit throughout my life.