I am part of the Blue cohort, photographed below. This picture was taken almost 3 months ago during orientation – long before most of us knew each other or had taken a single class at SOM.  I’m the one in that bright red circle. 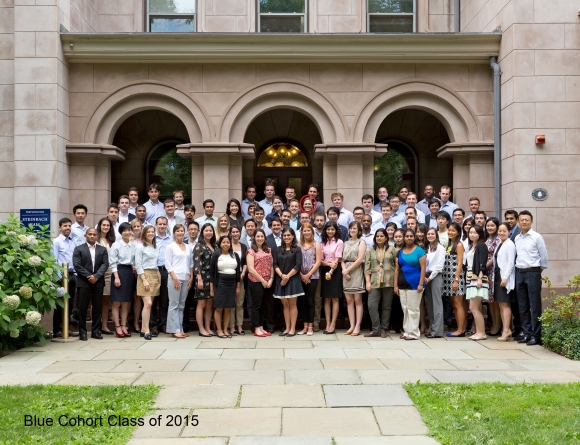 My friend Chris is to my right.  He’s the reason I have maintained any semblance of physical fitness since matriculating.  Chris teaches a high-intensity interval training class called 30/60/90® at Payne Whitney Gymnasium that I attend with many other members of the cohort every Monday night.  Chris came to SOM via New York City where he spent two years working for an immigration non-profit helping LGBT and HIV-positive immigrants after three years as a consultant with Booz & Co.

The person to my left, Jamie, is another good friend.  Jamie lived in Boston before school and worked at Bain Capital.  When several members of our cohort decided to dress up as Baywatch for Halloween, Jamie was the hammerhead shark.  On Halloween night, he playfully “attacked” several of our classmates at GPSCY, the graduate student bar, and relied on us, the lifeguards, to wrestle him away.  We saved many good classmates out there on the dance floor.

Stories such as these abound when I scan my eyes across the photo of our cohort.  The sampling of experiences, personalities, talents, and areas of interest are astounding, to say nothing of the quality of the people.  On any given day, we could discuss a case about a company or an industry that someone in the cohort can comment on from personal experience.  In just the last two weeks, students have spoken about their experiences working at Google, PSI (Population Services International), in venture capital, and as medical doctors, to say nothing of their global work experiences either as ex-pats or in their home countries.

Within the cohort, each person is a part of a 7 or 8 person learning team.  On my own learning team, there are students from Brazil, China, Turkey, and the West and East coasts of the U.S with backgrounds in consulting, non-profit, engineering, education, finance, and government.  We spend time together outside of class working on assignments, but every now and then we get together for dinner to relax and learn more about one another outside the classroom.

Another fun and unique aspect of cohort life at Yale is the Cohort Cup, a new tradition that was recently profiled in Bloomberg news.  Every few weeks we have inter-cohort competitions where cohort members can compete in various competitions to win points for their cohort.  Here’s a picture of Blue right before we captured the tug of war crown against Gold in early September. 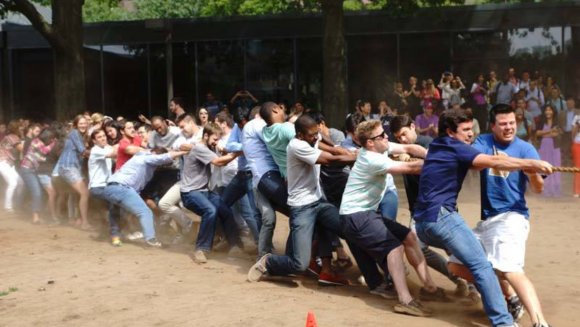 And here’s a video of some valiant members of our cohort who led us to Cohort Cup victory in dizzy bat.

As you can probably tell, I’m really into this whole cohort business…and for good reason! I am the Blue Cohort representative to Student Government, a position I ran for during Student Government elections at the beginning of the school year. Each cohort has a representative who serves as a liaison between Student Government and the members the cohort.  What this really means is keeping everyone apprised of what’s going on at SOM and inspiring a sense of unity within the group.  We form solutions to problems as they arise, plan extracurricular events, dream up Cohort Cup events, and dress up in outlandish costumes to inspire cohort pride (see below). 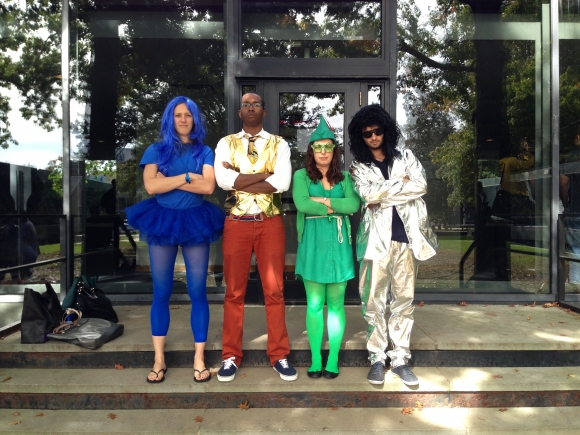 There’s nothing quite like surprising your entire cohort (and the retired brigadier general teaching that course) by walking into class dressed up like this! I’ve worked hard and learned a lot these past few months, but never at the expense of a bit of good fun.  More on that later though…time to go analyze the profitability of the cereal industry with my learning team.