As a recent college graduate, it was sobering to hear from friends who had lost their jobs after only a year on Wall Street. Things weren’t much better for the rest of us. We took the jobs we could get and felt fortunate to have them. We watched as peers squatted in New York City streets in the Occupy Wall Street movement, underscoring the social and economic inequalities in our society. I read the articles outlining why the government felt the need to bail out AIG and invest billions in an economic stimulus package. But like most Americans, I didn’t fully grasp the arguments. However, through my experience at Yale SOM and Professor Andrew Metrick’s course the Global Financial Crisis, my understanding is now much clearer. 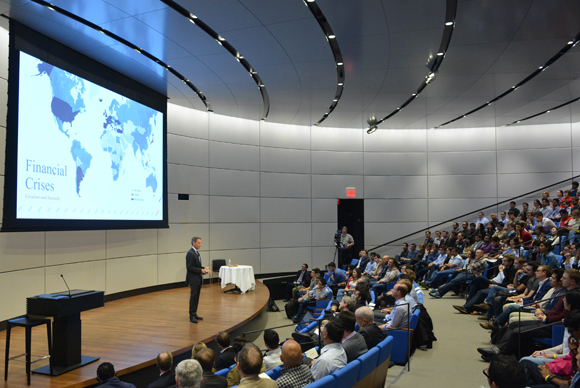 What's great about the class is that we are provided first-hand narratives from the policy makers in Washington, D.C., and from Yale academics from different disciplines. To hear former Treasury Secretary Timothy Geithner discuss the pressure and stress of the crisis was surreal. In a calm voice, he told us the story of talking to different panicked bankers and insisting that they remove the fear from their voices before discussing the situation with others. This personal anecdote certainly offers an insight into the title of his book, "The Stress Test." In it he argues for the use of overwhelming force in attempts to restore confidence in the market, a tactic Professor Metrick has dubbed the Geithner Doctrine.

Although my future career will not include a stint on Wall Street, I am interested in impact investing and how ecosystem services—ways ecosystems can benefit humans—are financed. This course has offered a great foundation for understanding how our banking system operates, an invaluable perspective for someone who wants to use capital markets to address the environmental and social challenges in this country.

The course offers a platform for dialogue and disagreement among the lecturers that provides a chance for students to delve deeper into the issues and analyze the government's response to the crisis through multiple lenses. John Geanakoplos, James Tobin Professor of Economics, argued that the Geithner Doctrine did not go far enough. He said that in addition to focusing on stabilizing the financial institutions through an influx of capital and quantitative easing policies, the Federal Reserve should also stabilize the overleveraged individuals in our society by offering partial loan forgiveness. In his paper, "Leverage, Default and Forgiveness: Lessons from the American and European Crises," Professor Geanakoplos states that over 4 million homes were foreclosed on and over 70 million people were affected, something that could (and should) have been prevented.

Professor Metrick countered that there were political and legal boundaries that prevented the government from implementing such policies. The truth to his statements can be seen in Secretary Geithner's recent Congressional testimony defending the bailout of AIG. While the debate continues about U.S. actions in the face of the crisis, austerity measures and continuing sovereign debt issues in Europe has contributed to the European Union’s third recession since 2008. It would appear that the use of overwhelming force was in fact the appropriate response to curb the downward spiral.

The course will continue to examine the political aftermath of the crisis and new regulatory standards. I look forward to continuing to expand my understanding of the aftermath of the recession through Secretary Geithner's third and final lecture on December 3rd.