Chili, Coffee, and Tug-o-War: Sometimes You Can't Help Being Awesome

Happy early Thanksgiving, everyone! I wish you all the best over the holiday, and hope that it is restorative, happy, and delicious.

Since we have no class this week, and I am on a plane to visit my family in San Jose, I figured I’d take some time to update you on some of the goings-on at SOM over the last few weeks. And although we’ve had a pretty academically intensive period, I’m going to focus on the fun stuff. (Though, in all reality, if you think that academics aren’t fun, you probably haven’t sat in on Barry Nalebuff and Daylian Cain’s Negotiation class.) So who has two thumbs and likes chili?

This guy. Well, luckily for me, the Food & Wine Club held the first annual SOM Chili Cookoff a couple Saturdays ago. Caulkins Courtyard was set up to showcase the stockpot skills of several dozen members of the Classes of 2013 and 2014, as well as their partners. Naturally, I tried them all. I’ve gotta say – I consider myself a pretty good cook, but these guys and gals just blew me away. 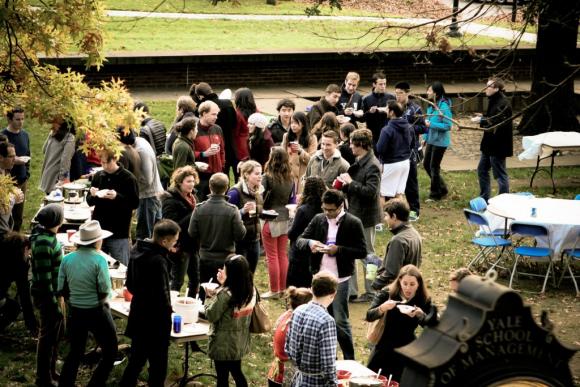 Some highlights – my roommate Meg ‘14, (who’s from Texas, and knows her stuff), made a smoky, non-traditional chili that was gone in the first 45 minutes of the cookoff. Jeff ’14 and Raisa ’13 had excellent dueling pots at their table, one sweet and tangy and mysterious, the other spicy, like a savory punch to the face. And Sam ’13 raised the bar on sausage-based chili with her Turkish-spiced concoction. Turnout was robust, and it was great to see first and second years brought together with partners and even members of other schools at Yale. As with many things at SOM, there was a little friendly competition built into the day. It was great to see Ellie ’14 win the ‘Best Meat Chili’ category with her husband Breck, but I nearly flipped out when my fellow Gold Cohort member Tom ’14 took the Best In Show prize for his Virginia-style sausage and peppers chili with accompanying jalapeno cornbread. Not only was his chili my favorite of the day, but he brought some additional bling to the Gold Cohort, (as if we needed it – sometimes you can’t help being awesome), in the form of his Chief Chili Officer trophy. 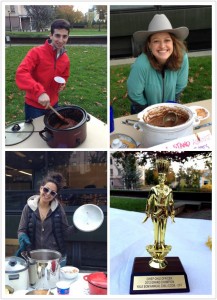 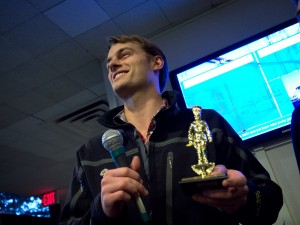 Speaking of competition, these last two weeks have marked the start of the Cohort Competition to determine which cohort reigns supreme. (Think: Harry Potter. Gold is Gryffindor.) Our inaugural contest was one of strength, but really one of traction; the old stalwart Tug-of-War. The Green Cohort (Slytherin) definitely rigged the game when they made Silver (Hufflepuff) stand on the muddier side of Caulkins and ultimately slip and slide to their doom. Blue (Ravenclaw) easily dispatched Gold the next day. I concede that they deserved to win as Gold, for all its greatest attributes, is a bit lacking in the size department. It’s a terrible thing when yours truly is the 4th or 5th biggest guy in the cohort. Anyway – Green must have rigged things again when they defeated Blue in the finals last week, though I’m still working out exactly how they did it. Here’s a picture of them celebrating like maniacs. It was actually amazing. 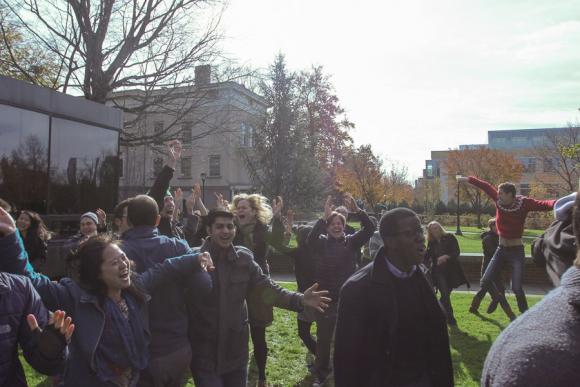 And last Tuesday, we had our 2ndAnnual SOM Coffeehouse across the street at the GM Room. It was an amazing showcase of our classmates’ talents. I heard a haunting rendition of The Pretenders’ “I’ll Stand By You” from Caren ’13 and Smita ’13, some raw and piercing poetry from Marcel ’14, and got to watch Katie ’14 be a badass on the sax with a 7-piece funk band made up of other SOMers. I truly got a show when Pedro ’14 and Dan JD/MBA ’14 broke out their guitars to play some classical flamenco and rumba. Their set easily went on for 10 minutes, and they had the entire audience entranced. I was so impressed by them, and all of the rest of the performers, and it made me so proud to be a part of the community, and kicking myself that I didn’t sign up in time to participate. I’m already preparing my soulful ballad for the spring. 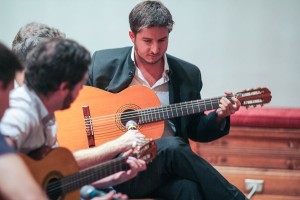 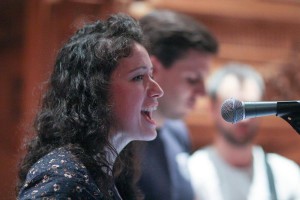 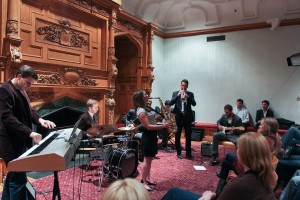 Finally – I should mention one more thing that happened right after the Chili Cookoff. We had something called the Tight ‘n Bright Party. I won’t say much, but will give you this blurry tantalizer. You are welcome. 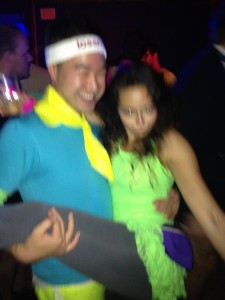