Part I: The Challenge

Your task: Use the paper clip and undertake a series of trades with the intention of getting something bigger and better.  You can do whatever you wish.  You have one paper clip. Those are the constraints. See what you and your partner can trade up for by Monday at 5 pm. Document your trades and we’ll see where we all end up once we meet again next Tuesday.

Yes, folks, that’s right—I had found myself embroiled in what is affectionately known as the Paper Clip Challenge as part of “Mastering Influence and Persuasion” with Professor Zoe Chance. We had been tasked with figuring out what value we could create with a partner out of a paper clip. This was no small task. How should we approach it? How should I approach it? I mean one guy managed to trade all the way up to a house. From a paper clip. I kid you not. A little daunting to know that that’s possible when all you can see before you is the familiar curvature of the ever-so-ubiquitous metallic paper clip.

Some may question, what’s the point of this challenge? What does it teach? The answer is that it depends for each person but I found it to be an interesting exercise that made me analyze and evaluate some of the internal decisions I make. In many ways, I think the challenge seeks to have us to ask more, to realize that many rejections come from our internal fear of rejection rather than others’ actual rejection, and to recognize that there are crazy creative ways to create value out of next to nothing.

If I’m honest, part of me was a smidge apprehensive about this assignment. This conflicted heavily with another part of me that saw this as an exciting challenge—an opportunity to hone my love of negotiating and haggling that had been re-awakened by my time in the Middle East prior to and during the International Experience in Spring 2014.  While I was in the Middle East, something re-sensitized my half-Lebanese roots. I loved the thrill of haggling and enjoyed asking questions and bartering on behalf of others.  But, something about this assignment felt different for me. Perhaps, it’s because I wanted to be able to offer my friends and people I’d approach in our community something I felt was useful to them. Perhaps, I was anxious about the fact that there would be a barrage of people asking our community for something bigger and better. I’m not really sure what it was. But, I felt initially like I lacked inspiration about how I wanted to approach this. My normally fairly creative, idea-generating side felt flat and unimaginative.

My partner and I decided that we’d each take care of the trades for a day and then see where we were.  He ended up managing the trades the first two days. We traded up for a cat pin and a black board. I was still really struggling with how I wanted to add value to this series of trades.  I knew that part of the challenge for me was in thinking about what I wanted to ask for. I kept thinking about what I might want or need that was tangible.  And, for me, that was the roadblock.

Initially, I wondered about what kind of tangible items we could ask people to give us in exchange for small items like paper clips and cat pins. But, I had more recently been focused —especially as a result of being one of the Orientation Leaders for 2016—on creating experiences and memories. I like bringing people together and am, frankly, much more motivated personally by shared experiences, quality time with people, connection and community rather than tangible items. (So, that person who takes the time to write a thank you note or who takes the time to do something thoughtful that has meaning resonates for me much more than snazzy, expensive, uninspired gifts). Tangible things that I cared about were harder for me to relate to as a result. Realizing this was a turning point for me. 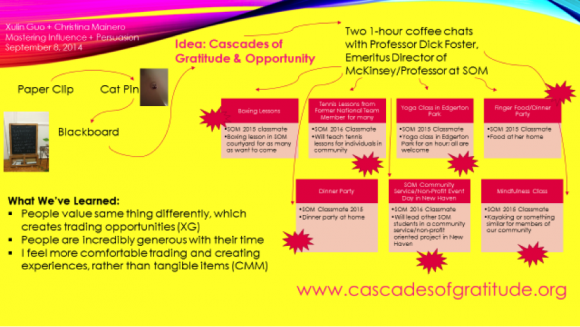 I remember thinking about the project during an early morning run on Saturday through East Rock Park when it struck me that maybe we could be able to trade up to a point at which we could have people trade experiences and have people create experiences with and for one another. With my orientation hat still sort of on in the early weeks of the school year, I thought that perhaps this would be another way in which we could create a cascade effect that strengthened our community through these joint experiences.

Next question: what could be the experience to catalyze this cascade and galvanize action by others? Immediately an idea came to mind. Finally, I’d synced up again with being the “What if” person. Thank God—the lack of inspiration I had been feeling had been so stifling. I decided to float the idea by a professor at SOM with whom I have worked on several projects to see if he might be willing to offer coffee chats with students in return for them promising to create or generate an SOM experience they believed would bring the SOM community together.

After I got home from my run, I fired off an email to my partner and got his okay.  Then I proposed the idea to the professor I wanted to start the cascade. He graciously agreed to the plan—AND—because this is SOM—told me he was interested in seeing how the cascade turned out as we tracked it. The interest and response from students was impressive. Within seven minutes of posting the opportunity for 4 students and asking people to submit their ideas to me, the spots were filled.  I then asked if the professor might be willing to increase his offer to 7 students since there had been 7 who had all really gotten back to me simultaneously. This request was graciously fulfilled. And, with that we started the project. The students have been carrying out and offering shared experiences for other students this fall, which has been exciting to see. For me, forging new connections and creating new experiences supported by this underlying thread weaving together support for our community was critical. And the fact that so many people at SOM are concerned with community-building is what ties us all together.

This experience taught me more than I expected it would about myself and how I operate. A number of new and related questions have bubbled to the surface for me around connection, social networks, shared experiences, and gratitude. In the long term, the geeky scientist in me would love to see how gratitude can permeate through and influence networks of people. I’d love to investigate which factors in social networks influence and are influenced by the initiation of something like one of our cascades.  What influences how long a cascade lasts?  What are the long-term effects on a community?  Do the effects differ according to the way in which a community is structured?  Can a cascade CHANGE the structure of a community?

I’ll end with one more thought: In speaking to Professor Chance about our project, I asked her if a body of research exists around giving, connectedness, and social networks related to our project that I could dive into. She recommended a book “Why Good Things Happen to Good People,” which I started (finally) the other day. I was struck by this passage near the beginning that I’ll leave you all with as we dive into Thanksgiving and the holiday season:

“Giving is the one kind of love you can count on, because you can always choose it: it’s always within your power to give.  Giving will protect you your whole life long…In generosity lies healing and health.”