So… I have a confession to make. Ever since I was 11, I’ve dreamt about living in California. Even though there is something special about the Midwest that will always feel like home, since childhood I have gravitated toward the Golden State’s sunshine, grand vistas and progressive, sometimes irreverent spirit. (Not to mention, some of the best Asian food in the world.) During the nine years I spent in Boston, for some reason, people often mistook me for a Californian, at which point I would usually beam and bask proudly in the misperception for a moment before correcting them. The past three weeks of living in San Francisco have already confirmed that this long-time dream was spot on. After taking a week off to settle in and explore the Bay Area (ranging from hikes in Berkeley’s Tilden Regional Park to Korean BBQ in inner Richmond), I began my internship at Wildfire, a social marketing platform Google acquired last summer. Although Wildfire is nearing its one-year anniversary with Google, the team has in many ways retained the best parts of startup culture, such as a refreshing, hard-charging passion for its mission. In a way, then, I get to experience the best of both worlds—coming back to Google, a company I love, and getting a taste of the startup experience. Only two weeks into my internship, I’m already learning a lot from my teammates and manager. On the weekends, I’ve relished the chance to spend time with my family, members of which live in the East Bay and South Bay areas. After living on the opposite coast from them for years, I am now loving this new proximity that allows me to, say, skip over to Oakland as I did this afternoon for an ad hoc 32nd birthday celebration for my cousin. Altogether, the change of pace from school has been a welcome break, not the least because I still get to see a number of my classmates anyway, so I don’t have to miss them too much! For example, this moment captured below captures a few SOMers during our first TGIF celebration as “Nooglers,” or new Googlers. In fact, there are actually a good number of us here at Google. 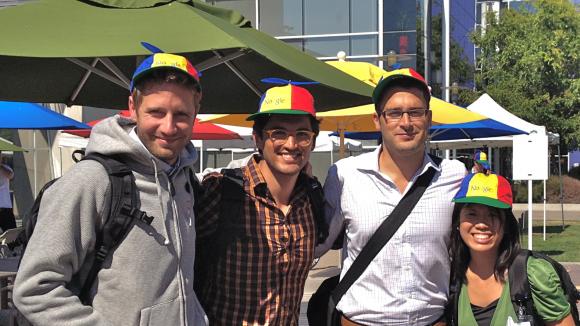