"Energy storage is a huge game-changer," said Macune, director of the energy and infrastructure group at Babson Capital, a global investment management firm. While he said that "conventional energy is not going anywhere," he believes that "a lot of utilities are going to adapt...in the next 10 to 20 years." 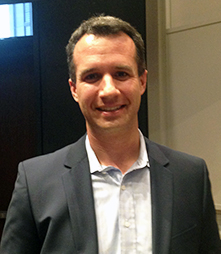 Macune spoke to students at an event hosted by the SOM Private Equity & Venture Capital Club on October 2. He compared today's rapidly changing utility industry to the telecom industry of the mid-1990s, when mobile devices forced sweeping changes in that sector.

Solar and battery options now offer less-expensive energy choices, and such alternatives will only expand, Macune predicted. He sees increasing opportunities for private equity to fund renewable energy projects as a result. "It doesn't matter if you love green energy," he said. "People want to save money. That will be the driving force."

Macune advised students that there are several paths into a private-equity career and that smaller firms are sometimes the best option. "A lot of people are concerned about the name of the firm," he said. "But you can make the same salary and have the same type of career at a lot of firms you've probably never heard of. Don't lock yourself into names. It matters, but it's not the only thing that matters. What you absolutely need to have is a love of the sector."

After graduating from SOM, Macune worked as an associate in the public utilities group at J.P. Morgan. A stint in banking can be good preparation for a career in private equity, he said. "It assures you'll' have the raw skills you need."

But banking is not the only route into private equity. Macune said that 30% to 40% of the people he encounters previously worked in sectors such as energy or healthcare. Private-equity firms tend to value industry-specific experience in areas where they do deals, he said.

Macune also urged students to take a long-term view of their careers. "When you're interviewing at firms, look at people in their 30s, their 40s," he suggested. "Where do they live? What kind of work are they doing? Do they seem happy?" Geographic, cost-of-living, and family considerations come into the mix, he said.

Good people skills are critical to advancing at a firm, Macune added. "Nobody likes a jerk," he said. "We all know really intelligent people, very capable people, whom nobody wants to work with."

Luck, too, plays a role in a career trajectory, Macune said. "By luck, I mean working for a good group and having a manager who is valued at the firm," he explained. "But remember: you can't control all the factors, and there is no perfect job."